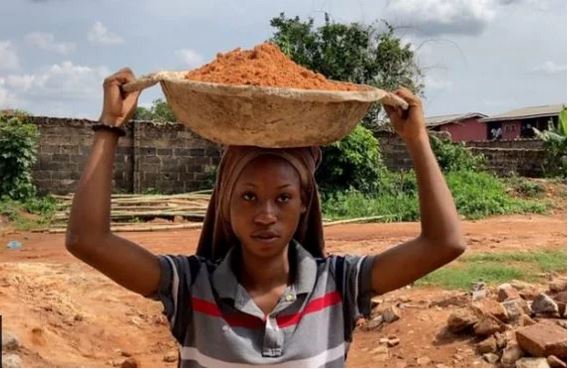 In an interview with BBC Pidgin, Efemonghe said her decision to take up the job was informed by the situation of things with her parents.

A 200-level student of finance at the University of Benin (UNIBEN), Jennifer Efemonghe, has narrated how she was mocked by her friends for working at a construction site to meet her immediate needs.

In an interview with BBC Pidgin, Efemonghe said her decision to take up the job was informed by the situation of things with her parents.

The lady explained that her father had initially kicked against the job but noted that she had to convince him to allow her to do it.

“I started working here because I need money and the fact that I am not the only child of my parents so I didn’t want to put pressure on them for my financial needs. Also, my parents don’t really get good pay where they work so that made me think of what to do in school to support myself and my parents. With what I get from here, I use it to buy textbooks and other things as a student in school,” she said.

“I started doing this work last month when we started exam. That was when I saw this work. My father was angry at first but I tried to convince him because we really need the money and due to the situation of things at home and he agreed.

“He, however, told me to stop the work after a while because it’s not too good for my health. I won’t lie, the work is really demanding. Carrying granites, blocks or sand to the third floor of a building under construction is not easy.”

Efemonghe said she had initially kept the development away from her friends but noted that they eventually got to know about it and started mocking her in class.

The undergraduate said she, however, remains unperturbed by such mockery.

“When I first saw this work, I didn’t tell my friends because I felt they won’t like it or I would be mocked. But one day while I was working, they were passing by and when they saw me, they started laughing at me,” she added.

“So, when I got to school while we were writing exam, they started mocking me, asking me numerous questions inside the class. But I wasn’t bothered by that because they were not the one paying my school fees.

“At least, it was paying me and I didn’t have to beg others for money. I’m not ashamed of any work that gives me money as far it’s legal and does not go against moral principles.

“I am happy that my co-workers here are supportive. They don’t laugh at me rather they encourage me.”

Efemonghe said she refused to sleep around with men like some ladies would do to get money so as to protect her dignity.

“I know there are other ways to get money as a woman but I chose this because it’s better. As a girl, if I choose to go around sleeping with men, my parents would not be proud of me and apart from that I would lose my own dignity,” added.

“I also dreaming of becoming the next director-general of the World Trade Organisation (WTO) like Ngozi Okonjo-Iweala.”

From BBC y'all 😫♥️ pic.twitter.com/JaNRjBVh1n