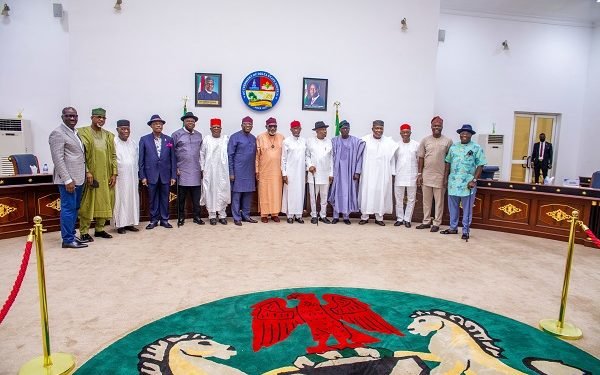 Southern governors are said to be awaiting President Muhammadu Buhari’s return from France trip to present him the resolution reached at their meeting in Asaba, Delta State.

A reliable source in the Southern Governors’ Forum had confirmed this to newsmen on Sunday, May 16, noting that all arrangements have been made by the governors in the 17 states of Southern region of Nigeria.

The southern governors all on Tuesday, May 11 converged in Asaba to deliberate for hours the issue incessant attacks including kidnapping, banditry, farmland destruction among other criminal activities of herdsmen from the Northern region of the country.

As part of their 12-point resolution, the governors led by the governor of Ondo State, Oluwarotimi Akeredolu, had said, “We observe that the incursion of armed herders, criminals and bandits into the southern part of the country has presented a severe security challenge such that citizens are not able to live their normal lives, including pursuing various productive activities, leading to a threat to food supply and general security.

“Consequently, the meeting resolved that open grazing of cattle be banned across Southern Nigeria.”

When contacted the Ondo State Commissioner for Information and Orientation, Mr Donald Ojogo, said the Chairman of the SGF and Ondo State Governor Mr Rotimi Akeredolu, had stated that the forum would meet with the President.

Ojogo said, “He (Akeredolu) has stated this already that the forum will meet the President and present the issues raised.”

The president’s spokesperson, Garba Shehu, has said that the summit will focus on reviewing African economy, following shocks from COVID-19 pandemic, and getting relief, especially from increased debt burden on countries.