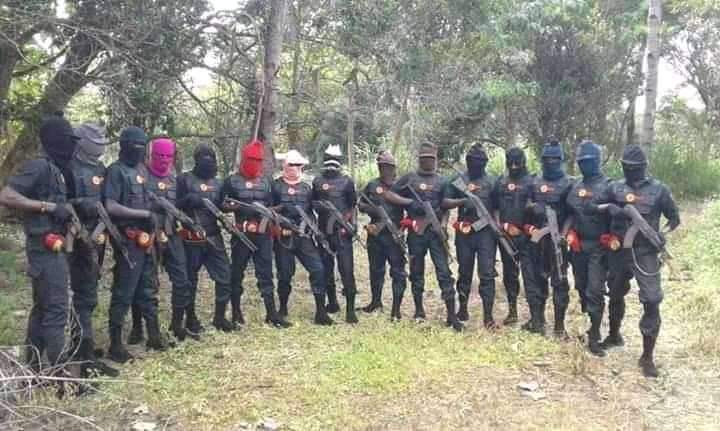 The Indigenous People of Biafra (IPOB) is reportedly seeking to exchange weapons with the Ambazonia Governing Council (AGovC), the separatist movement in Southern Cameroon, following their alliance.

According to a report by Foreign Policy, the two groups are also seeking to exchange personnel of their respective paramilitary arms in pursuit of their separatist goal.

Like IPOB, the AGovC wants the English-speaking parts of Cameroon to break away from the country and form a ‘Federal Republic of Ambazonia’.

This is following prolonged allegations of marginalisation by Anglophone Cameroon in the hands of the Francophones said to make up about 80 percent of the country.

Their concerns reached a crescendo in 2016 when they protested some government actions, including the posting of French-speaking magistrates and teachers to the English-speaking regions, leading to a military clampdown.

In September 2017, the AGOVC deployed Ambazonia defence forces — similar to IPOB’s Eastern Security Network (ESN) — in Southern Cameroon, worsening a crisis that has killed not less than 2,000 people in the country.

In a briefing in April, Nnamdi Kanu, leader of IPOB which has been outlawed by Nigerian authorities, announced a “new dawn” with the two secessionist groups “coming together to confront our collective enemies.”

“Even though our struggles for freedom have had different trajectories, Biafrans and Ambazonians have shared destinies,” he had said.

Cho Ayaba, AGovC leader, had also said the two groups intend to “walk together to ensure collective survival from the brutal annexation that have occurred in our home nations.”

Details of the alliance were not stated at the time, but Foreign Policy quoted representatives of the two groups as saying they will “work to secure their shared border and ensure an open exchange of weapons and personnel.”

Capo Daniel, the deputy defence chief of the Ambazonia defence forces, also said the scope of the union will include joint operations and training bases.

“We have been very careful in our association with the Biafra movement because we didn’t want to destabilize the region, but we have been cornered,” he reportedly said.

“The Nigerians have failed to act, the international community has failed to act, so we have no other choice but to get into an alliance that can better our chances to defend ourselves.”

Since IPOB launched the self-funded ESN to “halt every criminal activity and terrorist attack on “Biafraland”, the south-east and parts of the sout-south have continued to record a spike in violent attacks.

According to a report by TheCable, killings in the south-east tripled after the birth of ESN — IPOB denies any wrongdoing.

Security agencies especially the police have also been increasingly targeted and killed in the region, with their arms often taken away.

With the secessionist groups seeking to exchange arms and trained personnel, the alliance could mean more trouble for the south-east, where the governors’ forum had launched a joint security outfit to restore peace in the troubled region.