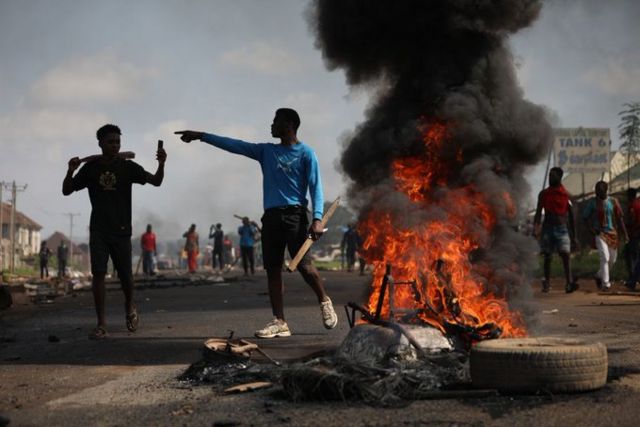 Operatives of Lagos state police command have foiled attempts by suspected hoodlums to raze two police stations in the state.

The police command also disclosed that its officers repelled the attack and eventually apprehended 12 persons.

There was crisis in Ile-Epo axis of the Lagos on Monday, as protesters marched to the police station in the area over the alleged killing of a man said to be a commercial motorcyclist.

Speaking on the development, a resident of the state told newsmen that the motorcyclist was killed by a truck.

In a statement released on Monday, the police public relations officer, Olumuyiwa Adejobi said there was an attempt to raze the station but the police repelled the attack and arrested 12 persons.

Adejobi added that the police prevented another attack on a station in Elemoro area.

“The Lagos State Police Command has tactically repelled some hoodlums who attempted to set ablaze the Oke Odo Division of the command today 24th May, 2021 and twelve (12) of them were arrested. The command wishes to state clearly that no life was lost and the Police Station was never burnt,” the statement reads.

“Similarly, the command has restored normalcy to Elemoro where another set of hoodlums attempted to set ablaze the newly built police station which accommodates the Area J Command, Ajah and Elemoro Division of the command, in connection with a case of fatal accident recorded in the area on Monday 24th May, 2021.

“The Commissioner of Police, Lagos State, has deployed adequate personnel to the areas. He has also ordered that the incidences at Oke Odo, Ile Epo and Elemoro be thoroughly investigated. The details of the incidences will be revealed as soon as possible.

“The Commissioner of Police therefore appealed to the general public to remain calm and go about their lawful businesses as all hands are on deck to suppress any act of lawlessness and criminality in the state.”