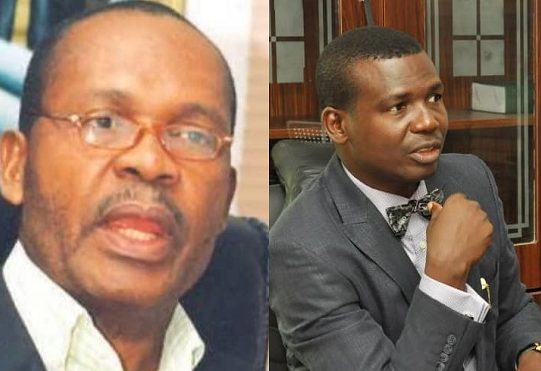 Joe Igbokwe has been called out by a Nigerian lawyer for lying against the Lagos Judicial Panel.

Joe Igbokwe, the Special Adviser to the Governor Babajide Sanwo-Olu has been called out for lying against the Lagos State Judicial Panel on Special Anti-Robbery Squad (SARS)-related abuses.

Ebun-Olu Adegboruwa (SAN), a member of the panel called out Joe Igbokwe for taking to Facebook to claim that the panel concluded that nobody died at the Lekki Tollgate.

Igbokwe had written on Facebook, “We conclude that the allegations that people died at Lekki Tollgate are mere speculations without proof — Lagos Judicial Panel.”

Adegboruwa said he was a member of the Panel, noting that the Lagos Judicial Panel never reached such a resolution.

He stated that the panel has yet to get evidence from the Lagos State Government and the Chief Pathologist.

He also said the panel has yet to conclude with the testimonies relating to the hospitals where it was alleged that people with gunshot wounds were treated.

Adegboruwa said, “I have just come across the Facebook post of Mr Joe Igbokwe, a member of the Lagos State Executive Council as Special Adviser to the Governor, to the extent that the Lagos Judicial Panel made a finding that nobody died from the Lekki Toll Gate Incidence of October 20, 2020. I was thoroughly embarrassed as I was diminished, by the said post, coming as it were, from someone who should know better.

“I’m a member of the Lagos Judicial Panel. The Panel never ever said this. No such finding came from the Panel at all. As a matter of fact, the Panel has just opened the cases of EndSARS protesters, who have video evidence with which they hope to disprove the claims of the Nigerian Army that nobody was shot.

“So, I truly don’t know where Mr Joe Igbokwe got his story from, but it’s certainly not from the Panel of which I am a member.

”We are even yet to take evidence from the Lagos State Government, from the Chief Pathologist, we are yet to conclude the testimonies of the hospitals where it was alleged that people with gunshot wounds were treated.

“So, how on earth can we conclude as a Panel that people died or people did not die when we are yet to hear the whole testimonies of those involved?

”I do humbly appeal to all Nigerians to disregard the statement from Mr Joe Igbokwe which had no verifiable source. Members of the Panel are people with proven integrity and I can assure all Nigerians and indeed the entire world, that our findings will be based on truth; if people were killed at Lekki Toll Gate on October 20, 2020, we will say so loud and clear and heavens will not fall, but if otherwise, we will also say so, clearly.”

The EndSARS protest, a social movement that involved a series of mass protests against police brutality in Nigeria rocked the nation in October 2020 and its huge impact was felt across the streets of Lagos.

One of the demands of the protesters was that the Sara, a notorious unit of the Nigerian Police with a long record of abuses, should be disbanded.