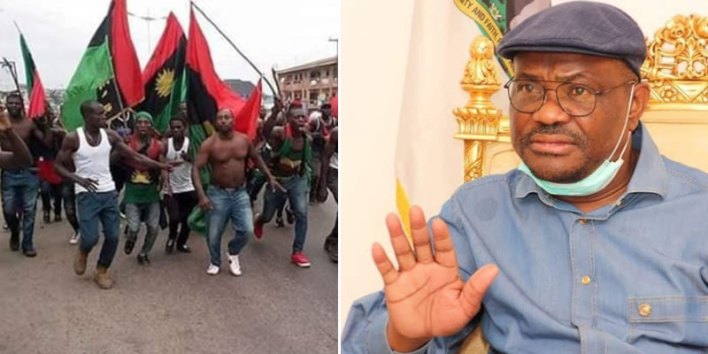 The Biafra Nations League, BNL, has lambasted the Executive Governor of Rivers State, Nyesom Wike, for threatening members of the Indigenous People of Biafra, (IPOB) in his state.

The secessionist group described Wike as a shameless talkative who would “run into the bush when situation gets out of hand in the state.”

BNL in a statement said “Any Governor who wants to kill his people over a cause will be haunted down no matter the kind of security men with him.”

Recall that the governor during the commissioning of construction work at the Ahoada Campus of the Rivers State University and the dualization of the Ahoada-Omoku Road had said IPOB members allegedly threatening the peace of the state would soon meet their “funeral”.

Reacting to the threats issued by Wike, BNL in a statement jointly signed by its Deputy National Leader, and Head of Operations, Ebuta Takon and Chief Head of Operations of BNL, Henry Edet, said the Governor himself is not safe.

They added that “people above his calibre in Nigeria and outside Nigeria have been assassinated despite their security backup.”

Takon urged their members and supporters in the State not to be frightened by the threat.