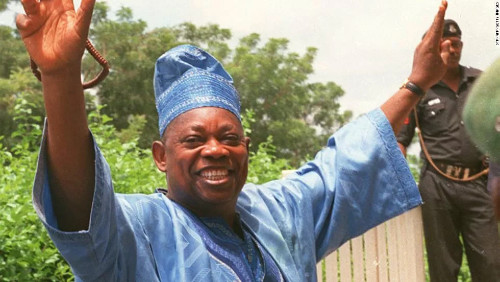 The daughter of Chief MKO Abiola, Hafsat Abiola-Costello, has revealed how former President Goodluck Jonathan turned down the advice of the former Governor of Osun State, Rauf Aregbesola, to honour her father.

Hafsat stated this during a virtual colloquium tagged: Africa: Interrogating the Leadership Question.

She noted that the former president expressed fears that there might be a backlash if he recognized Abiola, the winner of the 1993 presidential election.

The economist noted that that the minister of Interior pressed for recognition for Abiola as a former President even before President Muhammadu Buhari became president.

Hafsat said: “There was a story that one of my siblings told me. You know that recently President Muhammadu Buhari honoured MKO but Ogbeni had been working on it. He had a one-man campaign on this issue.

“And well before President Buhari was President, when we had President Jonathan, Ogbeni also approached Jonathan to make an appeal that MKO be honoured.

“Ogbeni offered his thoughts and President Jonathan said do you think it is possible because he had some concerns about backlash. So, it was not something that was carried out eventually.”