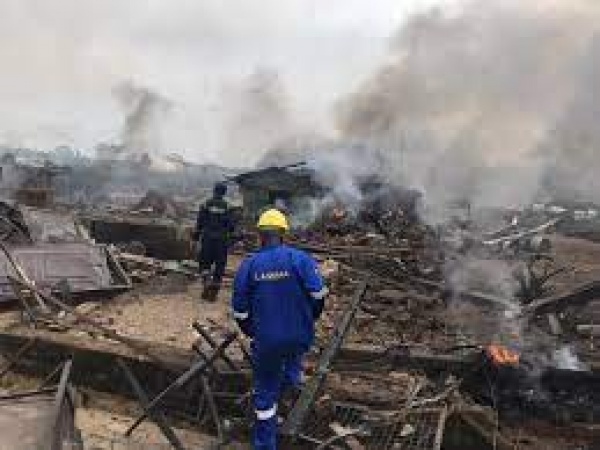 Eight people have been confirmed dead and eight are receiving treatment for various degrees of burns at the Lagos State University Teaching Hospital and the General Hospital, Gbagada, as a result of the gas tanker explosion on Mobolaji Bank Anthony Way, Ikeja, Lagos on Thursday night.

According to Farinloye, “The initial search and rescue activities revealed that 13 persons sustained various degrees of burns. Out of this, nine are males while four are females.
“Preliminary assessment on vehicles damaged indicated that about 25 were destroyed as at now” (yesterday morning).

However, giving update on the incident and confirming the level of casualty, the Director General of the Lagos State Emergency Management Agency (LASEMA), Dr. Olufemi Damilola Oke-Osanyintolu told THISDAY last night that 13 people were rescued but that five succumbed during treatment at the various hospitals, adding that they had recovered three bodies yesterday morning at the scene of the incident.

Oke-Osanyintolu said, “We rescued 13 people, and out of this number that was receiving treatment at LASUTH and General Hospital Gbagada, we lost five. Eight are with us that are receiving adequate treatment. We recovered three bodies in the morning. During the process yesterday those in hospital received various degrees of burns; some 100 per cent, 80 per cent and 70 per cent and others 20 per cent.”

He said they had improved treatment coordination which was being supervised by Governor Babajide Sanwo-Olu, stating that the Ogun State Governor, Dapo Abiodun, whose state property was directly affected, was also in touch with his Lagos counterpart.

He said their response was between five and 10 minutes, adding that it was “swift, prompt, effective and efficient.” He noted that they were able to manage the situation to prevent the fire from spreading to the Sheraton Hotel, and to a petrol station which are on both sides of the OPIC facility.”

The lesson learned from this incident, he said was that “we need to put a lot of safety measures in place concerning the LPG that is being conveyed everywhere in a metropolitan and cosmopolitan state like Lagos State.”

Also yesterday, the Ogun State Government expressed shock at the fire incident, in a statement it issued through Ogun State Property and Investment Corporation.

The Special Adviser and Managing Director of the corporation, Arc. Abiodun Fari-Arole described the incident as “tragic, a rude shock and unforeseen one, as it was understood from a preliminary report that the fire was caused by a LPG tanker that exploded right in front of the Plaza.”

He added that people injured during the unfortunate incident were presently receiving adequate treatment, while he expressed his sincere condolences to the families of the victims.

The MD commended the efforts of the fire service men who promptly responded when called upon last night and appreciated the efforts of security officials who prevented hoodlums from taking advantage of the incident.

Fari-Arole noted that speculations on the general impact of the incident should be avoided, saying that the report of the investigation into the fire incident would be awaited as events continue to unfold.

(Text only from THISDAY)