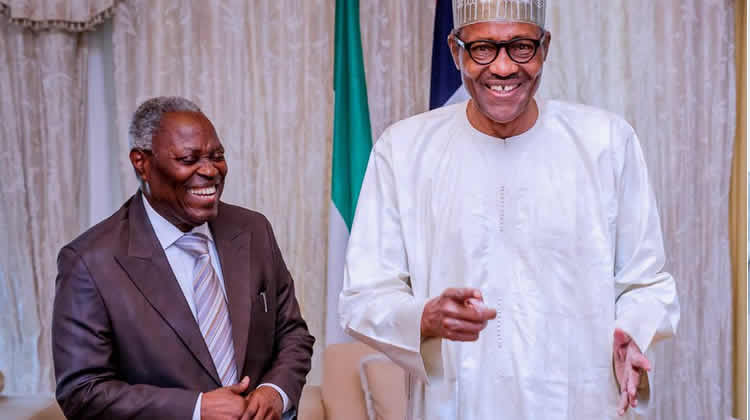 A storm of reactions by Nigerians has greeted comments made by the General Overseer of the Deeper Christian Life Ministry, Pastor William Kumuyi, calling on Christians not to attack the president of the country through any means, in what many see as a support for President Muhammadu Buhari.

Pastor Kumuyi made this call during his sermon at the Deeper Life Bible Church, Headquarters, Gbagada, in Lagos, Nigeria’s commercial city on Sunday, June 2.

Delivering his sermon entitled “The Believers’ Preservation Until the Day of Visitation“, Pastor Kumiyi noted that real Christians must obey constituted authorities and shun violence.

The clergyman said Christians are strangers and pilgrims in the world and must be Christ-like in their character, conducts and conversations.

Reading from Biblical passage, I Peter 2: 11-25, Pastor Kumuyi stressed that Christians’ lifestyle must reflect Christ in civil society, saying that government derives their authority from God.

His words: “Don’t attack the president of the country whether in words or in the newspapers or through internet.

“If we are to honour the governors in the states, how much more the pastors, “ the clergyman added.

Apparently displeased with the comment, Nigerians took to the micro-blogging site, Twitter, where they questioned Pastor Kumuyi.

Some of the reactions below…

Pastor Kumuyi is a respectable and responsible man of God,i like him;But he should allow people to express their views about their leaders and speak truth to power;that is their only shield of defending democracy and propelling the wheel of freedom and justice.

Jesus, who came from heaven, criticised King Herod, a political leader (Luke 13:32). Paul, who went to heaven and returned to Earth, criticised Peter (Galatians 2:11). So, should we obey Them or you? #FreeLeahSharibu #RenosNuggets https://t.co/ZvVbSJ7WFB

I saw Pastor Kumuyi trending so I decided to watch the Service. Here are two clips from what he said.. Enjoy😉 @PremiumTimesng @renoomokri @ShehuSani @realFFK @SaharaReporters pic.twitter.com/1gqBO97FU8

Pastor kumuyi is a scum. Yes he is

Some folks here dont read the full report of something.. but just run here and start talking yen yen yen…
Pastor kumuyi talked about People in authority not specifically Buhari..
p.s we’ve said all sort of things concerning Buhari since 2015
What has changed?? pic.twitter.com/2IDIYZW1uD

We get problem for this country o.. Pastor Kumuyi said "Don't attack Buhari" He didn't say "Don't criticize Buhari" but no children of perdition must be woke! Sigh…
When did criticism become =to personal attack?

Don't attack Buhari is different from don't criticise Buhari……
What do I know?
PrayForNigeria.

I took my time to read and listen Pastor Kumuyi's preaching, right now I'm not trying to defend him but I'll like to butress the fact that many of us do not read the full report on any media, we only pick the headlines. An example of one which I witnessed was when Adeboye

Pastor Kumuyi said Christians should stop criticizing Buhari by quoting Peter 2: 11-25, but I think he skip or forget the below verses.👇

I must not be.

You can as well tell us what he said exactly. Let's take it from there.

Don't forget that it's a direct quote and Pastor Kumuyi hasn't debunked it.

Until we get a rejoinder, the status quo remains.

Pastor kumuyi is not stopping you to criticize the president.. he is not. The question is if you are given the opportunity to talk to Buhari one on one can you tell him all his mistakes to his face?

I don't understand,Pastor Kumuyi say we should not condemn misleaders but you wrong,we should speak truth 2 power,its OK 4 dem to killing us

You should also be civil enough to allow Pastor Kumuyi to express his opinion. An opinion based on bias and hatred does not do any side any good. https://t.co/ylwkcH8uLP