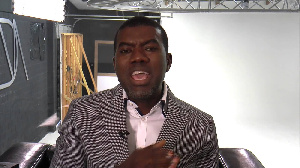 Former Presidential aide, Reno Omokri has reacted to the recent request made to President Muhammadu Buhari by Yoruba socio-political organisation, Afenifere, over security issues in the country.

DAILY POST had reported that the Yoruba socio-political organisation, Afenifere, had urged the Federal Government to urgently put an end to terrorism, kidnapping, banditry, and the crisis between farmers and herders in Nigeria.

Afenifere said these challenges can be stopped through state policing.

This was part of the resolutions reached by Afenifere during a meeting presided over by the body’s leader, Ayo Adebanjo on Tuesday in Ogun State.

In a communiqué issued at the end of the meeting and signed by Afenifere’s spokesman, Jare Ajayi, the body urged Nigerians to defend themselves against bandits.

Reacting, Omokri in a post via his Twitter account on Wednesday said he was so disappointed, adding that it’s a huge disgrace for Afenifere to be making such plea to the President.

He further noted that Kano didn’t ask anyone before creating hisbah, adding that if Buhari couldn’t stop that, he has no right to stop state police.

“I am so disappointed with Afenifere for asking for state police from Buhari.

“Who gave Kano Hisbah? Did Kano ask anyone for Hisbah? They just created it. Stop asking Buhari for state police. Create it.

“If that lousy fellow has not stopped Hisbah, he can’t stop you!” He wrote.