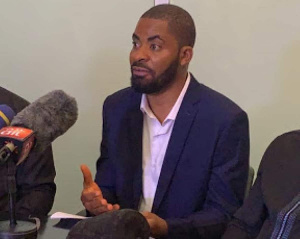 Popular Nigerian rights activist, Deji Adeyanju, has suggested that the Federal Government is fueling the security challenge in the country.

Adeyanju suggested that the Federal government is supporting bandits, killer herders, and Boko Haram in their clandestine activities.

The rights activist explained that these criminals were not more powerful than the Nigerian security agencies but support from government has kept them afloat.

In a tweet, Adeyanju wrote: “Bandits, killer herdsmen and Boko Haram are not more powerful than our military, DSS, Police, DIA, NIA, etc; they are just getting Govt support and help.”

Bandits have been abducting and killing people in the Northern part of the country.

States like Zamfara, Kaduna, Niger, Sokoto, Kebbi, and Katsina states have been the most affected by bandits.

Recently, gunmen believed to be bandits had attacked the Nigerian Defence Academy, NDA, and killed some officers while abducting two Majors.

While bandits are ravaging the North, killer herders have been attacking farmers and sacking communities in other parts of the country.