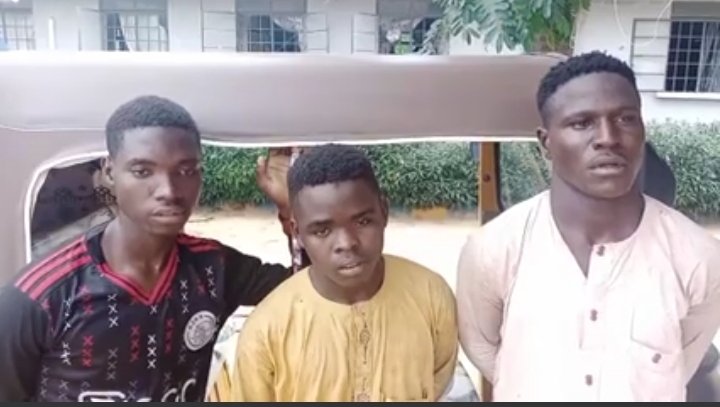 Kano State Command of the Nigerian Police Force said its operatives have arrested a syndicate that specialized in robbing innocent citizens of their valuables within Kano metropolis.

DSP Abdullahi Haruna Kiyawa, the Command’s Public Relations Officer disclosed this on Wednesday in a short video posted on his official facebook.

He said the trio were arrested by the personnel of Dala Division, under its DPO CSP Mansoor Idriss, who acted on the order of arrest issued by the State Commissioner of Police, Sama’ila Shu’aibu Dikko.

The PPRO noted that this followed a report forwarded by one victim, who was robbed of his phone and other valuables by the suspected criminals who pretended as tricycle operators.

“We received a report from the victim of the crime who boarded a tricycle to Fagge without knowing that the tricycle operator as well as two other occupants were criminals operating as a syndicate. They threatened him with daggers and took away his phone and other valuables.

“Upon receipt of this report, the Kano State Commissioner of Police gave Dala Divisional Police Officer, CSP Mansoor Idriss order to trace the criminals via the tricycle’s registration number as given by the Victim and ensure they are arrested.

“The Division’s personnel immediately swung into action and arrested the suspects”, he said.

The suspects: Aminu Ayuba 16 years old; Ibrahim Yusuf 18 years, as well as Sani Idriss Mohammad 20 years have all confessed to have robbed the victim using daggers.

The PPRO advised passengers and members of the public to be extra-careful always, especially while boarding commercial tricycles.

According to him, the State Commissioner of Police has since ordered for a thorough and discrete investigation for subsequent prosecution.