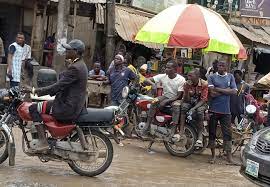 Members of the Articulate Motorcycle Owners and Riders Association of Nigeria, Magboro, Ogun State, have kicked against the hike in ticket rates and introduction of riders’ permits and called for the removal of their chairman, Mrs Funmi Fadipe.

The motorcyclists blocked the Cele Bus Stop, Magboro, and refused to carry passengers during a protest which started on Monday and continued on Thursday.

PUNCH Metro learnt that the crisis worsened on Wednesday when certain hired hoodlums attacked some of the riders, leaving two injured.

The leader of the protesters, Joseph Daniel, said the demonstration was to call the attention of the authorities to the excesses of Fadipe.

He said, “We have not been safe since she came into power. She denied knowing anything about the riders’ permits, but later some boys beat up Okada riders that did not have the permit.

“We were told by the state Commissioner for Transportation that the price of the permit was N2,000, but here we were told that it was N2,500 and any rider that was caught without it would pay N3,000 or N4,000 for it. We pleaded for grace of two weeks to sensitise our members to this new law, but our pleas fell on deaf ears.”

The Secretary-General of the association, Mr Oche Michael, said, “The Okada riders in Magboro are protesting against the injustice being meted out to us by the AMORAN chairman, Magboro branch, in the person of Mrs Funmi Fadipe. Since she took up the job about two years ago, she has been rude to riders.

“We reported her to the state chairman in Abeokuta and she promised to change. But a few months later, she resumed this action. We want her removed; if she is not removed, the protest will continue.”

Another rider, Philemon Baya, said the ticket rates increased from N500 to N600 under the leadership of Fadipe.

He also decried the introduction of various stickers that cost about N9,000.

Responding to the demands of the protesters on Thursday, Mr Michael Aderele, who represented the state Publicity Secretary, Alhaji Sokoya Taofeek, explained to the motorcyclists that the permit was a directive of the state government.

“I assure you that the issue will be resolved and your request granted,” he added.

The state Chairman of AMORAN, Nurudeen Alowonle, while addressing the protesters via a telephone call which was put on speaker, announced the suspension of the chairman and appointed Aderele as the new chairman.

When our correspondent contacted the suspended chairman, she declined comment.

Fadipe said, “I don’t want to be involved in anything since I am already on suspension; I don’t have anything to say.”