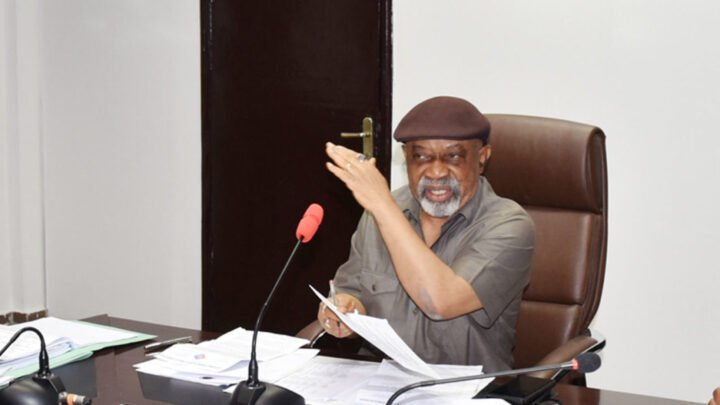 The Minister of Labour and Employment, Senator Chris Ngige has submitted that he thought Nigerian doctors were pulling an ‘April Fool’ prank on the federal government when they decided to start their strike on April 1.

The Minister was quoted to have made the statement while speaking on Friday during the Nigerian Health Commissioners Forum Quarterly meeting in Abuja.

According to him, the resident doctors are to be blamed for the strike action which has paralyzed activities in government hospitals across the country.

Explaining his stand, Ngige said the federal government did everything possible to avert the strike, but the doctors already had their minds made up.

He added that the National Association of Resident Doctors (NARD) failed to give the 21-days notice of strike as required by labour laws so he didn’t take them seriously in the first instance when they embarked on their latest strike action.

The Minister however observed that despite all that has happened, the government still went to the negotiating table with the doctors and is working hard to meet their demands.

The spokesman of the Ministry of Labour and Employment, Charles Akpan in a statement titled ‘We did everything possible to stop doctors’ strike- FG,’ quoted the Minister to have gone down memory lane in his speech at the event when he recalled that “the doctors were sleeping on their rights until COVID-19 pandemic broke out last year,” and the Federal Government felt that the N5000 hazard allowance paid to them since 1991 was too paltry.

He noted that the FG paid the doctors and other health workers bumper money as special COVID hazard allowance for three months in the first instance, to the tune of N32 billion, while states were told to pay as much as they could afford.”

Addressing the health commissioners, Ngige recalled events that led to the current strike action embarked upon by the doctors.

He pointed out that the federal government had met some of the demands of the doctors only for them to return with a fresh list of demands.

In his words, “In September 2020, they put a notice of strike, asking for Medical Residency Training Fund by which each of them will get N542, 000 to cover cost of books and journals for that particular examination, transportation and lodging for three days.

“Luckily, a supplementary budget was being put together and it was included and was paid to them. They called off the strike. By March this year, they listed other things again. They said the Residency Training Fund was not in 2021 budget. They also needed the hazard allowance to be upgraded and demanded that states should domesticate Residency Training Act. They said some states owed their people long months of salaries. They also wanted skipping allowance and arrears of consequential adjustment to minimum wage.

“Before we could say Jack Robinson, they went on strike on April 1. I thought it was April fool until April 2 when we didn’t see them at work. I told them that they didn’t give the mandatory 21 days’ notice to their employers who have written to me to complain.

“However, we returned to the table. Government pledged that the 2021 Residency Training Fund will be captured in the supplementary budget. This has been done and payment ready.

“FG also approved N11.3b for Group Life Insurance in 2020 and renewed in 2021. Government also held a series of conjoint NMA-JOHESU meeting on hazard allowance until the two disagreed and now asked for separate negotiations. They are the ones delaying action on this. Every other issues bordering on what the states have failed to do with doctors is where our hands are tied, but Federal Government agreed to speak to the Governor’s Forum.

“The arrears of consequential adjustment to the minimum wage cuts across sectors. Anyway, N160 billion earmarked for it has been exhausted and the next thing to do is to push for more. But really, some hospitals have received. We also abolished bench fees for Residency Training for those doing specialty. At this, the doctors left the negotiation happy.”

Ngige said despite all efforts by the government, the doctors returned on July 22 with fresh complaints again.

He said, “We told them that the Residency Training Fund is in the supplementary budget signed into law. So, we will now approach the World Bank to lend to CBN and from there, we will obtain the Naira component and it will be paid.

“They said one hospital, LUTH, charged their member bench fee. We inquired and the CMD LUTH said the person came before the circular was issued. So, the person will be refunded.

The doctors have accused the Federal Government of failing to honour and implement the Memorandum of Understanding (MoU) it signed with them.