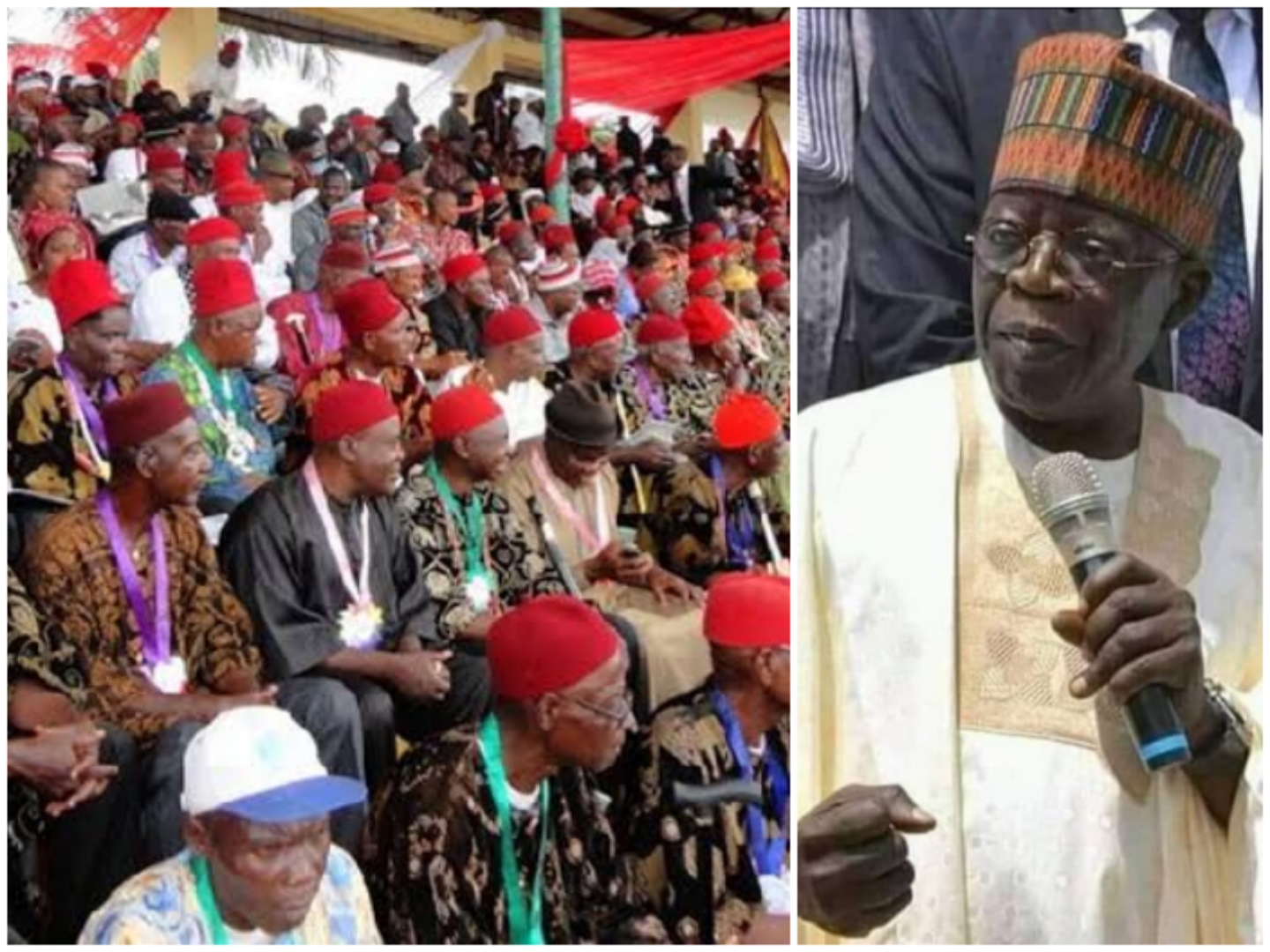 Ohanaeze Ndigbo, the highest Igbo socio-cultural organization led by Chief Chidi Ibe, has denied the endorsement of the former Governor of Lagos State and national leader of the All Progressives Congress (APC), Bola Tinubu for the 2023 presidential seat in Nigeria.

The group insisted that it is concerned with ensuring that an Igbo man takes over from President Muhammadu Buhari in 2023 in the interest of equity justice and fairness.

Ohanaeze, in a statement by its National Publicity Secretary, Chika Temple, and sent to DAILY POST on Thursday, faulted the media statement by a chieftain, Uche Okwukwu describing Bola Tinubu as a protector of Ndigbo.

Ohanaeze’s Deputy President General, Dim Uche Okwukwu had described Bola Tinubu, the National Leader of the All Progressives Congress, APC, as the protector of people of the Southeast, who is needed to guide Nigerians in the right path of democracy.

Okwukwu recalled that Tinubu was a fair leader who appointed Igbos into his cabinet during his administration as Governor of Lagos State.

He stated that Tinubu was needed for the unification of the Southern bloc.

However, Ohanaeze Ndigbo, in the release, maintained that it has not endorsed Tinubu ahead of the 2023 presidential election, stating that it amounts to injustice should anybody from any section of Nigeria denies Igbos the opportunity to occupy the nation’s number one seat in 2023.

The group noted the contributions of the former Lagos governor in deepening democracy in the nation but insisted that Tinubu did nothing much to advance the welfares of the igbos residing in Lagos during his reign as the Chief Executive officer of the state.

Ohanaeze Ndigbo also noted with nostalgia the appointment of Chief Ben Akubueze as Commissioner in the then administration of the APC national leader as Governor, insisting that the development should not be used as a yardstick in describing Bola Tinubu as protector of the Igbos.

The apex socio-cultural body further recalled that past administrations of former Governor, Orji Uzor Kalu and Chief Theodore Orji in Abia State fully appointed many numbers of non-indigenes from Yoruba and Hausa extraction into the state’s government, positing that the description of the Tinubu as the protector of the Igbo cannot be justified.

The Pan-Igbo organization said it wished the APC national leader quick recovery and sound health and advised him to jettison whatever political ambition, as Nigerians cannot afford again to electa a sick person as President to steer the ship of this country as witnessed under the current President, Muhammadu Buhari.

According to Ohanaeze, “We wish Ashiwaju of Yoruba land a quick recovery from London health trip, but, Ohanaeze will want to make it clear that we have not endorsed Tinubu or anybody for 2023 presidency, it will not be in the interest of the country to kick out Igbo nation from clinching the presidential seat, because, other regions in this country have taken their turns, natural justice demand that other ethnic nationalities must rally round the people of the southeast extraction to produce Buhari’s successor.

“Again, Ohanaeze doesn’t think that Nigerians will afford again to elect aa sick president as seen in our current President’s earlie medical trips which nearly led this great nation into economic and political instability. So, as we wish him good health, and appreciate his contributions to nation-building, we want to also urge him to continue playing his advisory role, as his name will remain in history, on the quest of all Nigerians to use this current democratic governance towards achieving a greater Nigeria where justice, equity, fairness and peace will guide our daily activities, characters, policies and programs, and as well as our electoral process.

“It must be a mistake for anybody to assume that Bola Tinubu is the protector of the Igbos. Ndigbo will not be in a hurry to recall the eviction notice slammed on Igbos in Lagos by the Oba of Lagos that almost brought disaffection between our brothers and sisters and the host ethnic nationality in Lagos. What were the contributions or efforts of Tinubu then in calling the monarch to order over the unlawful eviction order.

“Ohanaeze reiterates unequivocally that Igbo nation must produce President Muhammadu Buhari’s successor in 2023 to ensure the stability and unification of the country. In as much as the constitution of this country guarantees citizen’s rights to vie for political position of choice, we insist that natural justice demands that Bola Tinubu and his likes should support presidential project of the southeast of Igbo bloc. There is no doubt, very and quite unfair that the Igbo nation had been completely cut off from the sensitive affairs and governance of Nigeria, which is the major factor that sprung up agitations across Igbo land and beyond.

“On the secessionist agitation, Ohanaeze maintains its stand that the detained leader of the Indigenous People of Biafra (IPOB), Nnamdi Kanu should be released unconditionally, followed with other pro-Biafra agitators incarcerated in the nation’s security formations across the country. They should be released and granted presidential amnesty, from there, the federal government, Igbo leaders, and the leadership of Kanu-led separatist organization, the IPOB will engage in dialogue to restore the lost peace and unity of Nigeria”.