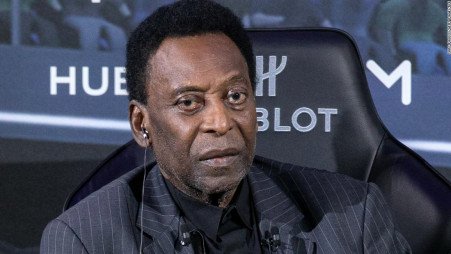 Pele’s medical team at the Albert Einstein Hospital in Sao Paulo said in a statement that he was “actively conversing and displaying vital signs within normal range.”

“My friends, with each passing day I feel a little better. I’m looking forward to playing again, but I’m still going to recover for a few more days,” he said.

“While I’m here, I take the opportunity to talk a lot with my family and to rest. Thanks again for all the loving messages. We’ll be together again soon!”

The suspected tumour was detected during routine tests, according to the hospital, where Pele has been undergoing treatment since August 31.

Considered by many the greatest footballer of all time, Edson Arantes do Nascimento, Pele’s real name, has been in poor health in recent years, and has had various stints in the hospital.

The only player in history to win three World Cups (1958, 1962 and 1970), Pele burst onto the global stage at just 17 with dazzling goals, including two in the final against hosts Sweden, as Brazil won the World Cup for the first time in 1958.

“O Rei” (The King) went on to have one of the most storied careers in sport, scoring more than 1,000 goals before retiring in 1977.