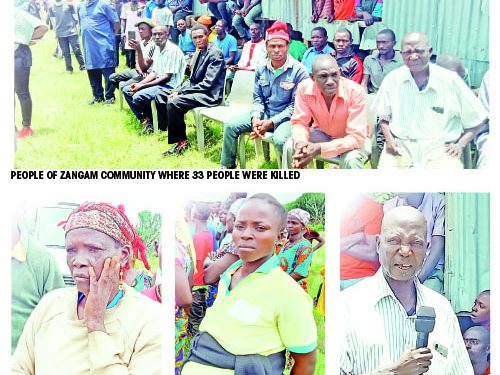 The victims, including women and children, were roasted like chicken in the room where they hid with the belief that they had escaped from the bloodthirsty sons of the devil.

Ever since the unprovoked night attack in which 33 people lost their lives in Zangam community in Jos North Local Government Area of Plateau State about a week ago, life has never been the same for 67-year-old Bitrus Pada.

He lost seven members of his family in the attacks.

The victims, including women and children, were roasted like chicken in the room where they hid with the belief that they had escaped from the bloodthirsty sons of the devil. But by the time the truth dawned on them, it was already too late. And, that was how they perished, without any help from anybody, in the raging inferno that ensued after the attackers set the house on fire. Even till today, Pada said, he gets terrified anytime the gory images of his elder brother, wife and four grandchildren who were trapped by the inferno before being burnt beyond recognition, flashes through his mind.

He shook his head as he told Saturday Sun how he watched helplessly as suspected armed herdsmen besieged his community, moved from house to house butchered, killed and set ablaze his brother and members of the community. According to his account, the herdsmen came in the early hours of Wednesday, August 25, 2021, and left in their trail, death, sorrow and anguish. The elderly man who wept profusely when Simon Lalong, the governor of Plateau State visited the community to commiserate with them, said in the local language:

“I escaped death because I slept in one of my houses located across the killing field. If I had been around, certainly I would have been consumed in the gory carnage. My elder brother was killed in my own house. I bought it and decided to accommodate him and his family. That is where the attack started.”

There had been conflicting reports as to who was responsible for the attack. But Pada insists that it was carried out by Fulani marauders invited by Hausa neighbours living in the community.

“It was Fulani that carried out the attack,” he said. “This is because we had misunderstanding between the natives and the Hausas resident in the community. The issue was resolved, but it is like they were not satisfied. So they joined forces with the Fulanis and attacked the community. Before the attack, they destroyed a bridge that linked the community with the outside world so that we would not get help from the security agencies. They killed everybody in my house except a young lady.”

He blamed the attack’s success on lack of adequate security. “Babale, Kunga and Yelwa community has only five police officers,” he pointed out. “An outpost in Kunga has two policemen. Babale has three policemen and our population is more than 100,000 people. Imagine what five policemen without arms can do to protect us.”

Two days after the attack, Pada described how he watched with tears as bodies of his brother and grandchildren were wrapped in cloth, put in coffins and lowered into a mass grave for burial. The violent attack added to the swelling number of widows, widowers and orphans in the community as the governor discovered during his visit.

Days after the Zangam attack, gunmen suspected to be herdsmen again spread sorrow, pain and anguish in Tamborong community in Ganawuri community in Riyom Local Government Area. There, 14 people were massacred. In that attack, a pregnant woman and mother of five, Juliet Yohanna, survived with her children by hiding herself in a mining pit. For four days, they hid there without anything to eat.

Her husband, Yohanna David, after searching and crying for days without seeing them, concluded that they had been consumed in the attack. But according to Juliet, although the armed men walked across the mining pit where she and her five children were hidden, luckily they did not see them.

“It was God that saved us. I never knew I could make it,” she said in the local language. “Imagine staying for four days without even water. And I am pregnant. My children also endured the whole situation.”

But what they may find difficult is living with memories of what happened on the night of the attack. She recalled: “On that fateful day, the Fulani were seen on the hills moving as if they were passing by. We didn’t know that they passed the night around the community. Our people couldn’t sleep that night. But as they tried to catch some sleep in the early hours of the fateful day, the herdsmen struck, and took them unawares. They killed 14 persons from the community, burnt our houses and destroyed our foodstuffs. We had nowhere to run to and no help coming our way.”

Seventy-nine-year-old Ladi Bitrus told the painful story of how her aged husband was killed during the attack before their house was set ablaze. “I lost all that I laboured for during the attack. I lost my husband. My house was burnt and I don’t have anything to fall back on,” she said.

Governor Simon Lalong, during his visit, encouraged residents to report suspicious movements around their communities in order to expose criminal elements resident in the communities. He expressed the belief that if Plateau people could unite with the government to fight criminal elements terrorising rural communities, the state would rise again. The governor, who lamented the recent attacks in some parts of Bassa, Riyom and Jos North Local Government Areas, noted that the state was facing a difficult moment.

He said: “Fellow citizens of Plateau State, we are facing a very difficult moment and we must work together to overcome. There is an obvious plan by those who desire to see Plateau in perpetual crisis to employ all divisive methods to achieve their objectives. We must not allow them to use politics, religion, and ethnicity to divert our attention from their criminal activities. My determination as your governor is to ensure that I encourage all citizens to embrace one another and use peaceful means to settle any disagreement.

“I shall continue to ensure that we build the capacities of our security agencies including the Operation Rainbow, the newly trained 3, 000 vigilantes, as well as our traditional institutions to be able to respond promptly and effectively to criminals so that we can enjoy peace and tranquillity.

“I call on all citizens of Plateau State to work in synergy and promote the long standing ideals of accommodation, tolerance, love, hard work godliness and forgiveness which we are known for. Plateau State remains the Home of Peace and Tourism.”

He revealed that he had met, one-on-one, with President Muhammadu Buhari with a view to addressing the security challenges in the state.

“The visit to the president was to seek more deployment of security forces and equipment to enhance the capacity of our law enforcement agencies to protect our people. I received assurances from him that the request would be acted upon immediately.

“Arising from my discussion with Mr President, I had a meeting with the Minister of Humanitarian Affairs, Disaster Management and Social Development as well as the DG of the National Emergency Management Agency regarding humanitarian assistance to the victims of the various attacks. I received commitment that very soon, relief materials will be delivered to us.”