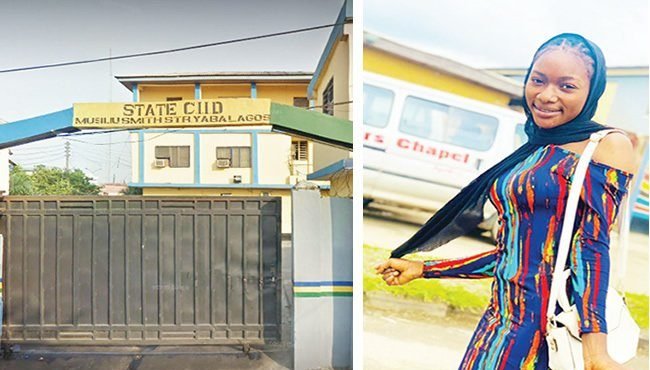 It was gathered that the incident happened around 11.30pm on Friday in the Surulere area of the state.

The victim was said to be in front of her parents’ house on Mogaji Street, Ijesha, Surulere, when some anti-robbery officers from the SCIID stormed the community.

A community leader, Onikeku Adedayo, said one of the cops approached him and demanded what he was doing outside by that time.

“I told him that I was in front of my house and I am a community leader. He said it was too late and I should go inside. I and a few others around me left. Not less than three minutes later, I heard a gunshot. I heard her sister scream that she had been shot. The policemen fled the scene immediately,” he added.

Adedayo said the victim was hit by a bullet that penetrated her two thighs, adding that she was immediately drenched in blood.

He explained that Monsura was rushed to a private hospital in the community, where she was rejected.

He said she was taken to the Randle General Hospital, where she was given first aid.

“By that time, she had collapsed and could not talk. The hospital placed her on oxygen and tried to stop the bleeding. They said they could not continue the treatment because her bones had been shattered by the bullet and she needed orthopaedic treatment.

“We were referred to either Igbobi Orthopaedic Hospital or Gbagada General Hospital. When we got to Igbobi, she was almost gone and we decided to take her to a private hospital, where she was confirmed dead. Although she was confirmed dead around 1.30am on Saturday, I believe that she died within 30 minutes of the shooting,” Adedayo added.

Another resident, Ismail Oguntoyinbo, said the policemen were from the SCIID, adding that they made an entry of their presence in the community at the Ijesha Police Station.

He said after leaving sorrow, tears and blood in their trail, they did not book their exit from the area.

“The Ijesha DPO said the policemen came to his station to report that they wanted to investigate some people they arrested and he gave them the go-ahead, but he never knew they came to raid. The DPO refused to disclose their identities,” he added.

According to PUNCH, Monsura was the third of three female children and filled Mass Communication and Accounting as her first and second choices in her Unified Tertiary Matriculation Examinations form.

She reportedly scored 236 in the UTME and was awaiting admission when she was killed.

Her remains were said to have been deposited in the Military Hospital morgue, Yaba.

“She ran inside the house when there was commotion outside, but one of the policemen shot her.

“Her mother fainted more than five times on Saturday after getting the news that she was dead. We were processing her admission when she was killed,” Oguntoyinbo said.

The victims’ parents were too distraught to speak to Journalists.

Her sister, Tosin, told PUNCH Metro that the family would take legal actions against the police.

While demanding justice for her, she described the deceased as honest, respectful, loyal and industrious.

Meanwi6, a credible police source said three cops went for the operation, adding that they had been arrested and detained at the SCIID.

The officer identified the cop who fired the shot as Sergeant Samuel Philips.

The state Police Public Relations Officer, Adekunle Ajisebutu, in a statement, explained that the cops were in the community to arrest a robbery suspect.

He noted that the policeman who pulled the trigger had been detained.

“The Commissioner of Police has directed that the said police officer should be tried and charged to court immediately after being dismissed from the Force. This, it is believed, will serve as a deterrent to others who do not act professionally in the course of their duties,” he added.