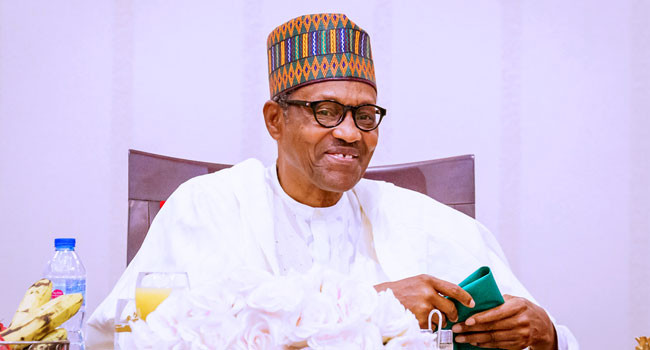 President Muhammadu Buhari has revealed that the Federal government will in October launch its N15 trillion infrastructure fund.

This as he urged commercial banks to join efforts with the government in alleviating poverty; adding that 1.6 million poor and vulnerable households, comprising more than eight million individuals are currently benefiting from the Conditional Cash Transfer programme which pays a bi-monthly stipend of N10,000 per household.

Buhari said this on Tuesday in Abuja while speaking virtually at the opening of the 14th Annual Banking and Finance Conference of Chartered Institute of Bankers of Nigeria.

He explained that ongoing efforts to reduce poverty in the country continue to grow, with 1.6 million poor and vulnerable households, comprising more than 8 million individuals currently benefiting from the Conditional Cash Transfer program, while N300 billion has been disbursed to farmers.

“From this number, 1.6 million poor and vulnerable households, comprising more than 8 million individuals, are currently benefiting from the Conditional Cash Transfer programmme, which pays a bi-monthly stipend of N10, 000 per household,’’ he said.

“Some of the various initiatives embarked upon to boost Agric trade in Nigeria include the Anchor Borrowers Programme through which the Central Bank of Nigeria had made more than 300 billion Naira available to over 3.1 million smallholder farmers of 21 different commodities including Rice, Wheat, Maize, Cotton, Cassava, Poultry, Soybeans, Groundnut, Fish, cultivating over 3.8 million hectares of farmland.

“It is on record that 80% of rice consumed in Nigeria is now produced locally.’’

The President said, in 2020, he approved the establishment of InfraCo Plc, a world-class infrastructure development vehicle, wholly focused on Nigeria, with combined debt and equity take-off capital of N15 trillion, managed by an independent infrastructure Fund Manager; to further strengthen recovery and empower more Nigerians.

“The Solar Power Naija project was launched in April 2021 with the aim of delivering 5 million off-grid solar connections to Nigerian households. In May 2021, the Rural Electrification Agency announced the planned deployment of solar-powered grids to 200 Primary Health Centres and 104 Unity Schools nationwide.

“Under the Family Homes Fund Limited, Social Housing programme incorporated by the Federal Government of Nigeria, more than two thousand hectares of land with title documents have been issued by 24 states with the capacity to accommodate about 65,000 new homes. The Central Bank of Nigeria is providing a N200 Billion financing facility, with a guarantee by the Federal Government,’’ he said.

Referencing a report from the National Bureau of Statistics which revealed that Nigeria’s Gross Domestic Product grew 5.01 per cent in the second quarter of 2021, the President said, “This is cheery news and an indication that the efforts of this administration at repositioning the economy is paying off.”

He urged bankers and financial institutions to leverage the abundant business opportunities to grow the economy.

He implored financial institutions to play a stronger role in making sure the Nigerian Small and Medium Enterprises were fit for purpose, with support in full implementation of “Agreement”.

“Indeed financial intermediary could not be any more relevant than at a time like this. We need you, the banks, to drive value creation by developing new technologies, scaling payment infrastructure to serve the diversified economies expected to benefit from this Agreement,’’ he noted.