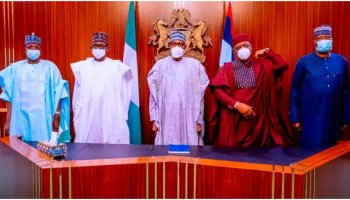 Former Minister of Aviation, Femi Fani-Kayode who joined the ruling All Progressives Congress, APC, on Thursday, has stated categorically that the APC he heavily criticised in time past is not the same party he joined.

He made the comment on Channels TV, Thursday night, while defending his defection to the APC.

Fani-Kayode explained that the APC he joined is forward-thinking, and accommodating.

While stating that he has come to realise that the perception he shared in the past about President Muhammadu Buhari was ill-informed, he added that he joined the ruling party to promote the unity of the country.

Fani-Kayode, when asked if switching side has any financial undertone, took exceptions and termed it “insulting”.

“I find that very insulting whether it is coming from your or my critics, I am not the first person that would decamp to the APC, have you asked others this same question?” he said.

The former minister added that the APC of the time he was criticising President Buhari is different from what it is today, noting that the kind of leadership the party has today is doing exceptionally well in national issues.

He said; “I wouldn’t have joined them if the leadership hadn’t changed. We can work together, we can build bridges. I have criticised the President in the past when I felt it was the appropriate thing to do, however, having moved closer to him over the last few months, I discovered a lot of things that I didn’t know before. There is a lot going on behind the scene.

“The most important thing is that if I believe in a certain philosophy and I am getting positive responses when I act from within the family and ensure that change is being affected in terms of policies and the way in which the country is run, then I begin to think that is it not better for me and my country to ensure that we operate from within and effect the changes we want to put in place, rather than from outside?

“There is no point having any principles without power. You must have power in order to ensure that whatever principles you have you can affect them. Without that, you will simply be talking and nothing will change. I have discovered in the last few months that I can work with people within the APC and elements within the government to effect a change.

“This country, in my view, is on the brink of war and disintegration and so we have to join forces together, set our differences aside and ensure that we build bridges of unity and peace. In a couple of weeks, I will be joining the party in FCT and not in the Southwest.”