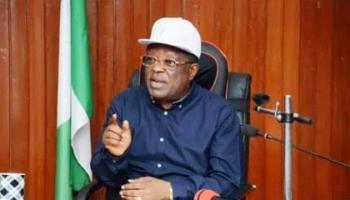 The Governor of Ebonyi State, Dave Umahi has declared that he doesn’t believe it is the right thing for states to start collecting Value Added Tax (VAT) directly.

He added that if all states start collecting VAT individually, states that are unable to generate sufficient funds will suffer, therefore the federal government should continue with the role.

To this end, he called on his colleagues pushing for VAT collection to be done at state levels to reconsider their stand and show concern for other states that don’t have much resources accruing to them and would be cut off if the federal government no longer collects VAT.

In his view, it is not right that some states would “eat and have so much surplus and then some other states don’t have much to eat.”

Umahi added that he has made his position known to his counterparts from the southern states and won’t be obeying the resolution passed by the Southern Governors’ Forum on Friday for them to pursue the move for VAT collection to be taken away from the FG.

The Ebonyi State Governor made his stand known on Friday while speaking as a guest on a Channels TV interview programme.

Rivers and Lagos State appear to be the leading voices in the demand for the states to have total control of VAT generated in their domains, the southern governors’ forum at the end of their meeting in Enugu on Thursday also adopted the idea for their sub-region.

Although the Court of Appeal has ruled that status quo be maintained pending the determination of an appeal filed by the Federal Inland Revenue Service (FIRS) against the judgment of the Federal High Court sitting in Port Harcourt on the matter, the governors are not taking their foot off the pedal.

A communiqué at the end of the meeting on Thursday by the Southern Governors’ Forum read by the chairman of the platform, Governor Rotimi Akeredolu of Ondo State, reiterated their unwavering stand.

“The meeting resolved to support the position that the collection of VAT falls within the powers of the states,” the communique read in part.

But Umahi on Friday, said the communique doesn’t speak his mind or that of the people of Ebonyi State.

He added that his deputy, Kelechi Igwe who represented him at the meeting on Thursday, made this clear already but because they were in the minority, the majority position was adopted.

Despite the adoption, Umahi has now said he won’t obey the content of the communique on the ‘VAT war’ with the federal government.

“We (Ebonyi) took a stand as a state with our leaders on the issue of the VAT war that is going and so my deputy carried it on to say that this is what my governor is saying and this is what the state is saying and he went ahead to explain with some other deputies that represented their governors.

“But together they were in the minority and it didn’t stop the majority from coming up with their communiqué. When it comes up to implementation and voicing out, I will continue to say: this is where is I stand; if it is a choice, I will choose what would benefit my state.”

Umahi argued that the VAT war is not the right step for the governors to take in their agitation for restructuring, adding that he believes in administrative restructuring and not total restructuring.

He added that “We have to be our brothers’ keeper; we have to see how we can grow the economies of the weakest states, otherwise, we will breed insecurity in those states.”

“There is no way in a relationship that you will get 100 per cent of what you put in, it doesn’t work that way.”

Umahi stated that more than 30 states including Ebonyi will not be viable if the states win the ‘VAT war’ with the federal government.

While he said he is in support of true federalism, the Governor observed that the process must be gradual

“Whatever thing we are doing, we have to think about the nation first. Let’s tarry a while and see how we can pass this river and then we can come to the fact of who is right and who is wrong.

“True federalism is not done in a day. If we want to do a restructuring, we have to have a gradual process to do that.”