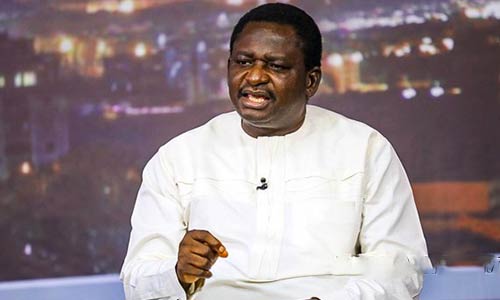 Special Adviser to President Muhammadu Buhari on Media and Publicity, Femi Adesina, has said that the administration does not borrow to consume but to invest in capital projects that will drive development.

This is as he said that Nigeria’s current Gross Domestic Product can comfortably accommodate the volume of borrowings.

Adesina said this on Monday while speaking on the Channels TV’s programme, ‘Politics Today’.

Adesina is in New York as part of Buhari’s entourage for the 76th United Nations General Assembly.

While fielding questions from the show’s anchor, Seun Okinbaloye, about the possibility of fresh borrowings from bilateral meetings at the assembly, he said, “You don’t go to the UN to seek borrowings. Any borrowing will not be approved until it goes through the National Assembly.

“The President is not going to borrow again. That is not the essence of the summit. When he meets with other presidents at the multilateral meetings, whatever is done there will not go through the back door. That meeting will be reported and whatever action is taken will go through the National Assembly.

“The President is aware of Nigerians’ clamouring against borrowing. He doesn’t live in space. He lives among the people. Many times, at the Federal Executive Council meeting when issues of borrowing come up, he talks about it.

“He says he knows people are saying his administration is borrowing too much, but we are not borrowing to put in our pockets. We are borrowing for development.”

Adesina said that this is the difference between the Buhari regime and others who he accused of “borrowing to steal, to pocket and to waste.”

“This administration will borrow and use it for development. And we can see evidence of those borrowings and the salutary impact it has had on our national infrastructure,” he said.

Asked about the recent outburst by former President Olusegun Obasanjo who said it is wasteful to borrow for consumption, Adesina said, “I read what president Obasanjo said.

“He said clearly that when you borrow for development, there is nothing wrong with it. That is the purpose of what the former president said.

“Whoever wants to take a negative slant can do so. But the essence of what the former president said was that there is nothing wrong with borrowing for development.

“And one thing about this Buhari administration is that it borrows for development.”

He explains that “Many times, the Minister of Finance has come out to say that the extent of borrowing to Nigeria’s GDP is tolerable. That the GDP can accommodate the borrowing. If it goes beyond that, there will be a red flag.

“Yes, it may be on the high side but the GDP can accommodate it.”

Asked if 100 per cent of what is borrowed actually goes for development, the aide said the question is better answered by the finance minister.

He said, “Propositions for borrowing that are brought before the FEC meeting. It must be thoroughly discussed. If anything comes and it’s for consumption, it will not sail through.”

He insisted that the borrowings are largely for capital projects.

Asked about a probable protest on September 24 when the President is due to address the assembly, Adesina said, “that’s would be consistent with democracy. If some people march in solidarity for the President, then it is okay for others to march against him. It is allowed.”