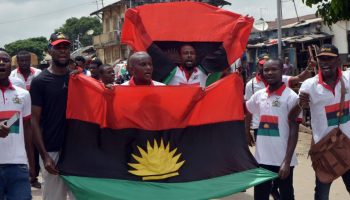 IPOB slammed the Buhari administration for always failing to respect court orders, stressing that Biafra land would be actualised.

The Indigenous People of Biafra (IPOB) has promised to hand President Muhammadu Buhari a bitter defeat at the International Criminal Court (ICC).

This was made public In a statement on Tuesday by the spokesperson, Emma Powerful.

Powerful maintained that it is not a proscribed group.

According to the pro-Biafra group Justice Binta Nyako of the Federal High Court, Abuja, had declared that the group is illegal.

IPOB slammed the Buhari administration for always failing to respect court orders, stressing that Biafra land would be actualised.

The statement read, “Notwithstanding the malicious propaganda and blackmail from agents of darkness, IPOB is not only a peaceful movement but a lawful organisation as well. Nigeria has a history of impunity when it comes to adherence to court orders and judgments issued by courts of competent jurisdiction, so we are not surprised that the Nigeria establishment in collaboration with purveyors of falsehood have continued to thread the same part of shamelessly dishing out lies and propaganda against us despite a ruling by her own court that IPOB is not unlawful.

“History they say is the best teacher and we, therefore, want to remind our oppressors that a Federal High Court, in Abuja, presided over by Justice Binta Nyako, had on March 2, 2017, ruled that “IPOB is not an unlawful organization.” The court which struck out six of the 11-count criminal charge the Federal Government preferred against our leader, Mazi Nnamdi Kanu and three other pro-Biafra agitators, declared that IPOB was not unlawful.

“Justice Nyako held that the Federal Government failed to prove that IPOB, allegedly managed by Kanu and his co-defendants — Chidiebere Onwudiwe, Benjamin Madubugwu and David Nwawuisi, is an unlawful society. So, if the federal government could not prove that IPOB is a terrorist organisation before its own court, is it then before the ICC (International Criminal Court) that it can prove the contrary?

“The Nigeria Government already knows that we are prepared for it at the International Criminal Court, ICC. Just very soon we shall meet there! The whole world is also aware of all the atrocities of the Nigeria Government through the instrumentality of its terrorist security agencies against the innocent and non-violent people of Biafra. Very soon we shall get the justice that we have been asking for. Biafra shall be actualised in our lifetime.”