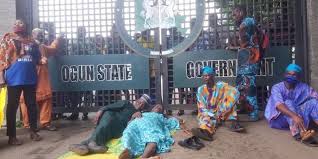 Pensioners stormed the streets of Ogun state to protest the alleged non-payment of N68 billion outstanding gratuity, said to have accumulated over 10 years.

The pensioners, identified as members of the local government pensioners association (LOGPAN), blocked the two main gates to the state secretariat in Oke-Mosan.

Tokunbo Talabi, secretary to the state government (SSG), and other civil servants were said to have been unable to access the secretariat for hours.

The protesters displayed placards with various inscriptions such as ‘gratuities are on sale to pensioners’, and ‘Governor Dapo Abiodun, honour your father and treat pensioners well’.

In June, members of LOGPAN had also staged a protest to express their grievances.

Ayilara kicked against the quarterly payment of N500 million by the state government for the outstanding gratuity, saying “it will take the governor 34 years to clear the outstanding by such arrangement”.

He called for an upward review of the policy to a vote of N1 billion monthly.

Addressing the pensioners after he was able to access the premises, Talabi appealed to them for patience, saying “the government is currently experiencing hard times”.

He, however, assured the pensioners that the government will respond positively to their demands.