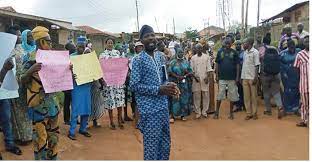 Residents of 52 communities in the Olokuta area of Abeokuta, Ogun State, have protested against the poor condition of their major access road which recently claimed the lives of a secondary school student and a pregnant woman.

The student, identified as Ishie Ijeomaka, was killed on his way home last Wednesday by a truck driver who lost control of his vehicle.

Scores of residents from Eruwon Laloko in Olokuta, the host community of the Abeokuta Standard Gauge Train Station, expressed displeasure at the condition of the road.

The residents, who were armed with placards with various inscriptions including, ‘Please save our lives, our children from bad road,’ ‘Please, our listening governor, save us from untimely death,’ among others, sought the attention of both the federal and state governments in fixing the road to prevent further loss of lives.

Oduleye noted that the road was the major access road to the Abeokuta Standard Gauge Train Station constructed by the Federal Government to boost the transportation system and enhance business activities.

He lamented that many residents had sustained various degrees of injury, causing permanent disabilities from crashes on the road.

Oduleye said, “Currently, it has turned to a death trap. A lot of people have been injured on this road, while some have lost their lives.

“Just last week, we lost a pregnant woman on this road when she fell from a motorcycle. Though she was rushed to the FMC Abeokuta, before we arrived, she was dead.

“Also, last Wednesday, a driver was trying to manoeuvre the potholes because of the bad road and unfortunately, he hit an SS 3 student who was writing his final year exam.

“The student, who was supposed to write his final paper on Thursday, is dead now. It has been happening like that for a long time.

“A lot of people have fractures while plying this road to the extent that when a patient gets to the FMC Abeokuta Orthopaedic Unit, they will ask if he got injured at Eruwon or they will ask if the person came from Kemta.

“So, it’s getting too much and we are powerless about it. At the community level, we have contributed for palliative measures, but it’s now beyond our control and has also created a lot of issues in the community.

“We are now pleading with the government to please save us from this problem.”

The Chairman of the Central Community Development Association in Oba in the Obafemi-Owode LGA, Imam Seidu Olabode, appealed to Governor Dapo Abiodun to carry out palliative works on the road pending the construction of the road by the Federal Government.

The Chairman of the Palliative Committee, Olarotimi Okeleye, revealed that over N10m had been spent on making the road motorable.

Also, a community leader, Chief Oluwaseun Akiyode, and the Baale of the community, Chief Ganiyu Abass, in their separate remarks, said several efforts were made to draw the attention of the state government to the problem when it sent top officials from the works and infrastructure ministry and that of the public works agency to inspect the road.