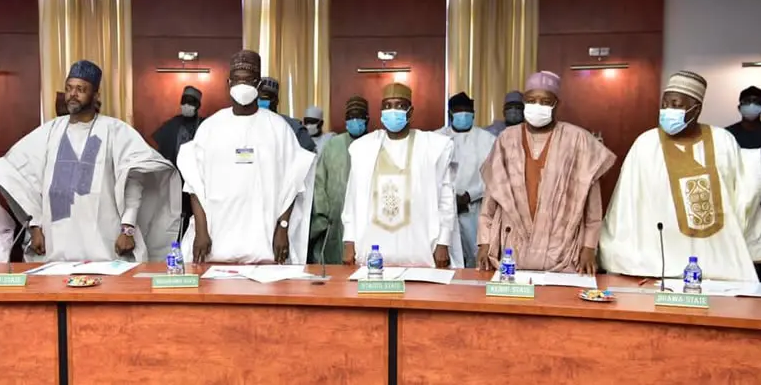 The Northern Governors’ Forum will on Monday (today) hold an emergency meeting to discuss issues relating to the Value Added Tax, The PUNCH has learnt.

It was further gathered that the planned meeting, which would be hosted by the Kaduna State Governor, Mallam Nasiru El-Rufai, would be presided over by the Chairman of the forum and Governor of Plateau State, Simon Lalong.

The Coordinator of the Northern Governors Forum Secretariat and Secretary to the Plateau State Government, Professor Danladi Atu, confirmed the planned meeting in an interview with The PUNCH in Jos on Sunday.

Atu said this as some senior lawyers took on the Attorney-General of the Federation and Minister of Justice, Abubakar Malami, SAN, over his recent statement that no state had the power to lay claim to the collection of VAT in the country.

The Federal High Court sitting in Port Harcourt had in a judgment last month held that Rivers State had the power to collect VAT within its jurisdiction.

But the Federal Inland Revenue Service headed for the Court of Appeal to challenge the judgment. At the appeal court, Lagos State filed an application that it should be joined with Rivers State as a co-defendant in the appeal filed by the FIRS.

The appeal court ordered parties in the suit to maintain status quo pending the determination of the appeal.

Malami, in an interview with Channels Television on Friday, said collection of VAT in the country was on the exclusive legislative list, adding that only the National Assembly had the power to make laws on VAT.

He stated, “As you rightly know, the issue of the Value Added Tax is an issue on the exclusive legislative list. And the implication of being on exclusive legislative list matter is that only the National Assembly can legislate on it. The question that you may perhaps wish to address your mind on is whether there exists any national legislation that has conferred the power on the state to collect VAT. And my answer is ‘no’.

Ozekhome said contrary to Malami’s claim, VAT is in the residual list and is strictly within the purview of state governments.

He said, “He (Malami) is dead wrong. There is nowhere VAT is reflected as a matter within the exclusive or concurrent list in the constitution of Nigeria.

“If anything, it is residual and is strictly within the purview of state government in our federal set-up.

“As of today, there is a judicial pronouncement on it by the Federal High Court, Port Harcourt, to the effect that only states can collect and administer VAT.

“That remains the legal position today. Until that judgment is probably set aside, that remains the law of the land. The mere statement the Attorney General cannot alter this truism.”

On his part, Adedipe warned that VAT is a serious constitutional issue and should not be politicised.

He said, “Is this in the 1999 constitution or a new one? Which number or section? Let him state it. It is not enough to say it.

“I am not aware that VAT is on any exclusive list of the constitution of the Federal Republic of Nigeria.

“Second, he is a defendant in the case, he should come to the court to come and put this across. It is not something he should give a press statement or side comments about. It is a very serious constitutional issue and therefore should not be politicised. Since we are before the appellate court, let us leave it there.”

Meanwhile, the Coordinator of the Northern Governors’ Forum Secretariat, Atu said told The PUNCH on Sunday that the forum would take a position on VAT at Monday’s meeting.

He stated. “The northern governors will be meeting in Kaduna on Monday and I’m sure one of the items on the agenda is about the issue of VAT.”

Asked whether the northern governors would be going to court to join the FIRS in the suit against Rivers and Lagos states over the VAT collection, the forum’s coordinator said, “You will get to know the position of the northern governors on the issue because I’m sure their resolution will be made public after their meeting on Monday “

Apart from Lagos and Rivers states, Ogun State has also started the process of passing a bill on VAT in its House of Assembly.

While some stakeholders including the 17 southern governors supported the position of Lagos and Rivers states that states should collect VAT, some northern governors, including El-Rufai opposed it.