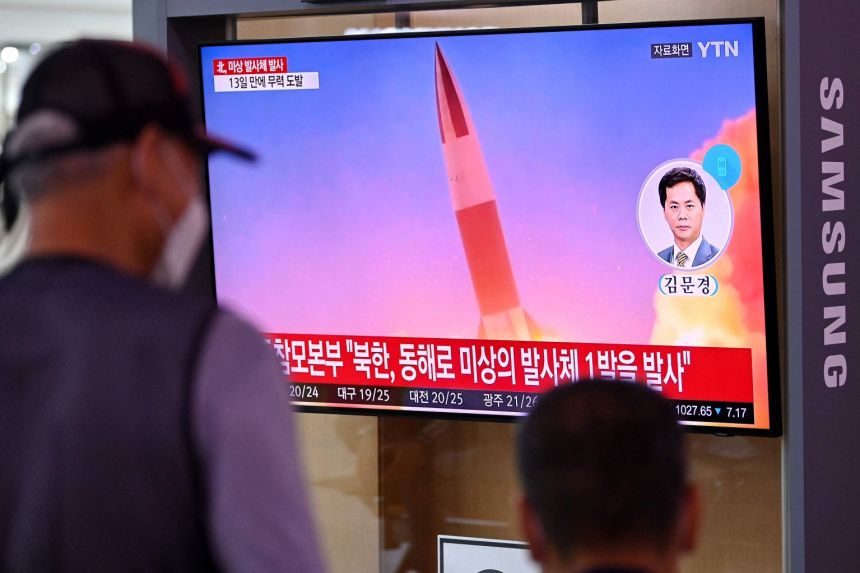 North Korea has successfully tested a new hypersonic gliding missile, state media reported Wednesday, in what would be the nuclear-armed nation’s latest advance in weapons technology.

Tuesday’s launch was of “great strategic significance”, the official Korean Central News Agency said, as the North seeks to increase its defence capabilities a “thousand-fold”.

Hypersonic missiles move far faster and are more agile than standard ones, making them much harder for missile defence systems — on which the US is spending billions — to intercept.

The launch from Jagang province “confirmed the navigational control and stability of the missile”, along with “guiding manoeuvrability and the gliding flight characteristics of the detached hypersonic gliding warhead” and the engine, according to KCNA, which called it the Hwasong-8.

The launch was watched by top official Pak Jong Chon, it said, making no mention of leader Kim Jong Un.

The official Rodong Sinmun newspaper carried a picture of the weapon — with a set of guidance fins at the base of its nose cone — ascending into the morning sky.

There was no confirmation of the missile type from Seoul.

Hypersonic missiles are generally defined as travelling more than five times the speed of sound, or Mach 5, but South Korea’s Joint Chiefs of Staff have — unlike their normal practice — not yet announced the weapon’s maximum altitude and flight distance.

The South Korean and US militaries were “capable of detecting and intercepting it”, they said in a statement Wednesday.

“Based on an assessment of its characteristics such as speed, it is at an initial phase of development and will take a considerable time to be deployed,” they added.

‘Top priority’
Both Koreas are building up their weapons capabilities in what could become an arms race on the peninsula, with ramifications for neighbouring Japan, China and the wider region.

North Korea, which invaded the South in 1950, is under multiple sets of international sanctions over its banned nuclear weapon and ballistic missile programmes, and earlier this month said it had tested a long-range cruise missile.

Developing the hypersonic missile was one of five “top priority” tasks in the five-year plan for strategic weapons, KCNA said.

Since inheriting power following the death of his father nearly 10 years ago, Kim has overseen rapid improvements in the North Korean arsenal, including developing intercontinental ballistic missiles (ICBMs) that can reach the whole of the continental United States and its most powerful nuclear test to date.

In January, Kim offered a shopping list of goals that included hypersonic warheads, nuclear-powered submarines, reconnaissance satellites and solid-fuel ICBMs at a five-yearly ruling party congress in which he described the United States as his country’s “principal enemy”.

Lim Eul-chul, a professor at the Institute for Far Eastern Studies at Kyungnam University, said North Korea was looking to use its weapons development “as a means to make room for diplomatic manoeuvering as well as enhancing military posture”.

More launches could be expected in the future, he added: “In a way, the North’s recent behaviour is very predictable.

“They had signalled military actions and are now executing them step by step.”

Submarine launch
Seoul is also spending billions on military development and this month successfully test-fired a submarine-launched ballistic missile (SLBM) for the first time, making it one of a handful of nations with the advanced technology.

On Tuesday, it held a ceremony to launch its third submarine capable of carrying SLBMs.

Washington and Seoul are security allies and the United States stations around 28,500 troops in the South to protect it from its neighbour.

Talks between Pyongyang and Washington have been largely at a standstill since a 2019 summit in Hanoi between leader Kim and then-president Donald Trump collapsed over sanctions relief and what North Korea would be willing to give up in return.

Pyongyang has since then repeatedly excoriated the South and its president Moon, and blown up a liaison office on its side of the border that Seoul had built.

In recent days, however, leader Kim’s influential sister Kim Yo Jong has dangled the prospect of an inter-Korean summit.

The administration of President Joe Biden — which condemned Tuesday’s launch as a sanctions violation and a threat to the international community — has repeatedly said it is willing to meet North Korean officials anywhere, at any time, without preconditions, in its efforts to seek denuclearisation.

But North Korea has not shown any willingness to give up its arsenal, which it says it needs to defend itself against a US invasion.