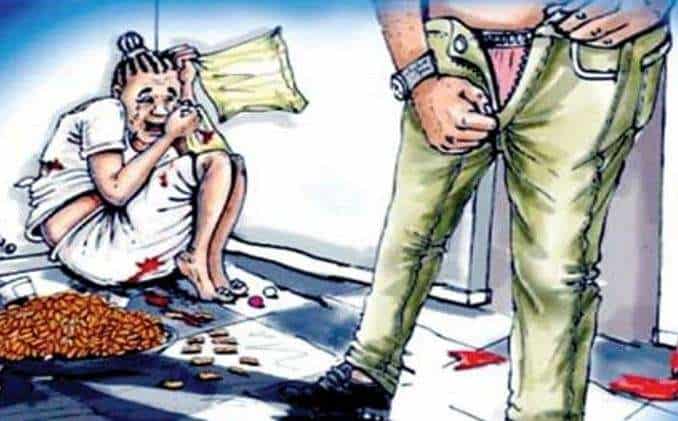 A teenager identified as Mercy (not real name) has disclosed how her father had carnal knowledge with her for about two years.

She further stated that she lost count of times that her father forcefully had sex with her.

The 52-year-old man was apprehended following a petition was filed by his wife with a human rights group.

Mercy while speaking on the incident disclosed that she tried to resist her father, he tricked her that he was teaching her the right thing.

She said, “My father started ‘sleeping’ (having sex) with me when I was 14-year-old. I resisted him but he told me he was teaching me in the right way. He said if he didn’t teach me, the boys outside would teach me. He did it whenever we were the only ones at home.

“I didn’t tell my mum because I thought she would not believe me. He had slept with me many times. I can’t count the number of times he had sex with me. He did it regularly.”

The mother of the victim disclosed that she caught her husband in the act about three months ago but he apologised and promised to change.

She said thereafter she relocated with Mary and other children when she caught her husband in the act again.

She stated, “I reported the incident to a human rights group in Ikotun (Lagos) and they gave me a letter to report at a police station close to our community and I went to Agbado Police Station. I caught my husband having sex with my daughter about three months ago.

“I warned him to desist from it. It was when he wanted to have sex with her again that I reported him to the human rights group. I planned to relocate the children and wanted him to write an undertaking but they referred me to the police.”

Adeline is his account admitted to having defiled his daughter but claimed to have done it once.

He said, “I am surprised she said I had sex with her many times but I have no excuse. I only had sex with her once. It was the devil’s handiwork. I was drunk that day because I didn’t have the means to pay my children’s school fees.

“The second time I wanted to have sex with her, her mum caught me. She fought with me and I begged her that it would not happen again. She exposed me because of a minor understanding. If I had known it would turn out this way, we would have settled the matter.”

The spokesman of the state command, Abimbola Oyeyemi, in a statement released on Friday, said the Commissioner of Police, Edward Ajogun, has ordered that the suspect should be transferred to the family support unit at Ota area command for further investigation and prosecution.

He said, “A 52-year-old man, Adebayo Akinrinoye, was on September 23, 2021, arrested by men of the Ogun State Police Command for unlawfully having carnal knowledge of his 16-year-old daughter. The suspect was arrested following a report via a petition brought to the Agbado Divisional Headquarters.

“In the petition, the victim alleged that her father had been sexually abusing her since when she was 14-year-old, and since then, the suspect had been regularly abusing her sexually. She stated further that all her efforts to stop her father from this ignoble act fell on deaf ears.

“Upon the report, the DPO Agbado division, CSP Kehinde Kuranga, quickly detailed his detectives to the scene where the suspect was promptly arrested. On interrogation, the suspect confessed to the commission of the crime but pleaded for forgiveness from his daughter.”