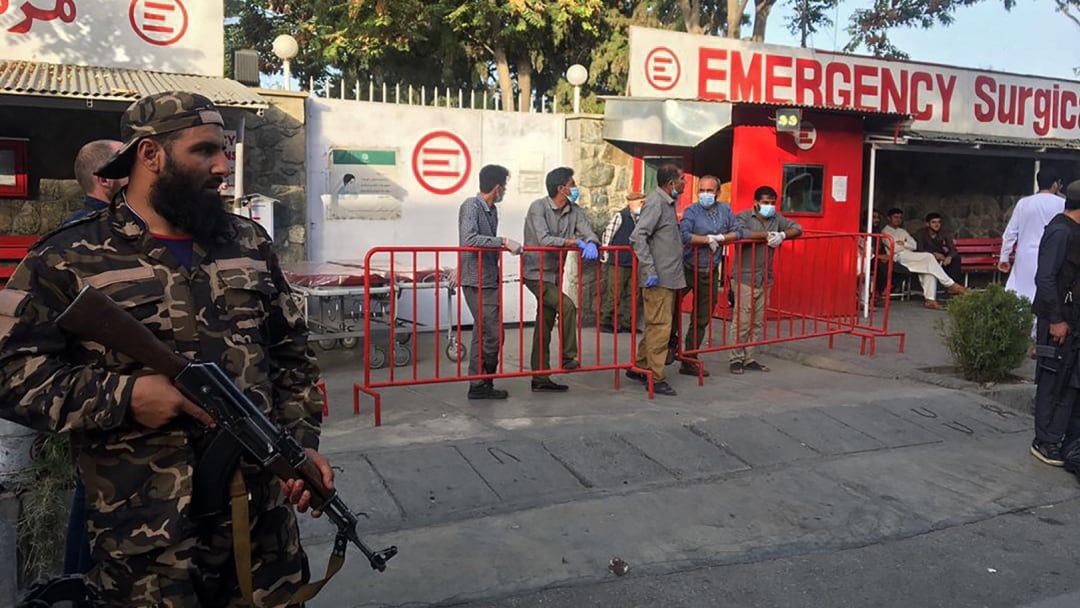 At least five civilians were killed in a bomb blast at the entrance of a mosque in the Afghan capital of Kabul on Sunday, according to a Taliban Interior Ministry spokesman.

The bomb targeted the sprawling Eidgah Mosque in Kabul, where a memorial service was being held for the mother of Taliban spokesman Zabihullah Mujahid, who later tweeted the attack had claimed civilian lives.

Emergency NGO, an Italian-funded hospital in Kabul, tweeted it had received four people wounded in the blast.

Sunday’s bombing was the second major attack in the Afghan capital since the Taliban takeover. An August 26 attack on the Kabul airport, which killed 182 people, was claimed by the IS-K, the Islamic State group’s Khorasan branch.

No one immediately claimed responsibility for Sunday’s attack.

The bombing at an iconic Kabul mosque raised questions over whether the Taliban can maintain security amid rising threats from the IS-K group.

Under the terms of the US withdrawal deal, the Taliban promised to maintain security in Afghanistan and ensure the country did not turn into a haven for jihadist groups.

The area around the Eid Gah mosque was immediately cordoned off. Ambulances carrying the wounded were seen rushing towards Kabul’s Emergency Hospital in the Shahr-e Naw area.

Ahmadullah, a shopkeeper who was near the mosque at the time of the attack, told AFP he heard “the sound of an explosion near the Eid Gah Mosque followed by gun firing”.

“Just ahead of the blast the Taliban had blocked the road to hold a prayer ceremony for Zabihullah Mujahid’s mother in Eid Gah Mosque.”

AFP journalists in two locations in the capital also heard the blast and shooting.

The blast, which could be heard across the centre of the capital, came shortly after the new Taliban “interim government” staged a rally just outside the capital, from which they were driven out in 2001 in a US-led operation launched after the 9/11 attacks.

A ban on unauthorised demonstrations has meant protests, many led by women, against Afghanistan’s new masters have dwindled.

But Sunday’s pro-Taliban rally in Kohdaman township in the hilly outskirts of Kabul was attended by 1,500 men and boys.

“This is the day we waited for,” said Khalil Haqqani, the new minister for refugees who in 2011 was labelled a terrorist by the US with a $5 million bounty on his head. He is a prominent leader of the Haqqani militant network founded by his brother Jalaluddin.

“We have achieved our goal, but it requires protection,” he told the gathering, with his rifle leaning against the lectern.

“My advice to the world is that they leave Afghanistan to Afghanistan.”

Flanked by armed Taliban fighters in combat gear, leading officials and commanders addressed an audience sat in rows of chairs under awnings, celebrating victory over the US and praising suicide bombers.

One speaker, introduced as Rahmatullah from nearby Mir Bacha Kot, said the Taliban’s victory was “the result of those youths who stood in queues to register for suicide attacks”.

The US, European nations and other powers that were major donors to the former Afghan government before the Taliban takeover have warned they will not recognise the new administration — made up largely of hardliners and no women — unless it becomes more inclusive.

Afghanistan’s neighbour Pakistan has urged the world to engage with the Taliban, while stopping short of itself recognising the new regime.

US Deputy Secretary of State Wendy Sherman, who will be in Islamabad next week, has pressed for an inclusive government in Kabul, and said Washington looks to “Pakistan to play a critical role in enabling that outcome”.

But while hundreds turned out for Saturday’s rally, the Taliban have been loath to allow similar gatherings by those opposed to their rule.

Last Thursday, the Taliban violently cracked down on a small women’s rights demonstration in eastern Kabul, firing shots into the air to disperse protesters and pushing the women back

Isolated anti-Taliban rallies, with women at the forefront, were staged in cities around the country after the group seized power, including in the western city of Herat where two people were shot dead.

But protests have dwindled since the government issued an order banning demonstrations that do not have prior authorisation, warning of “severe legal action” for violators.

Separately, the government of Qatar announced that a fifth evacuation flight had taken off from Kabul for Doha, carrying 235 people seeking to leave Afghanistan since the Taliban victory.