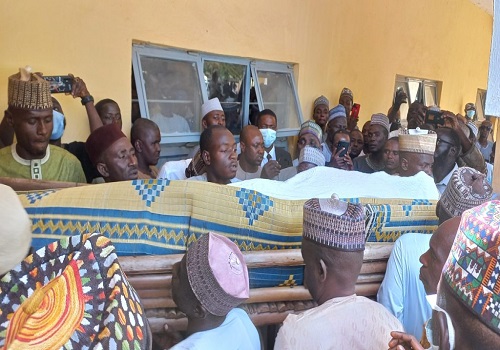 The News Agency of Nigeria (NAN) reports that Ruma, who was buried on Sunday in Katsina, served during the regime of Late President Umaru Musa Yar’adua.

The former minister who died at the age of 59 was buried at the same cemetery, where the late President Yar’adua and other prominent personalities from Katsina were buried.

NAN reports that the deceased who died on Wednesday in the United Kingdom was buried after a funeral prayer held at the Government Reserved Area (GRA) Katsina Juma’at mosque.

The funeral prayer, which was attended by a mammoth crowd was led by a renowned Kano scholar, Sheikh Aminu Daurawa.

Among the dignitaries who attended the funeral prayer were the Katsina-born business mogul, Alhaji Dahiru Mangal and the Secretary to Katsina State Government, Dr Mustapha Inuwa.

Others include: the Director-General of SMEDAN, Dr Dikko Radda, amongst other family members and political associates of the deceased.

In his condolence message, Radda described late Ruma as an illustrious son of Katsina, who struggled for the political, educational and economic development of the nation.

He further prayed to God to forgive his shortcomings and grant the deceased paradise and give his family the strength to bear the loss.

Also speaking, Inuwa described the death as a monumental loss not only to Katsina, but to the nation in general.