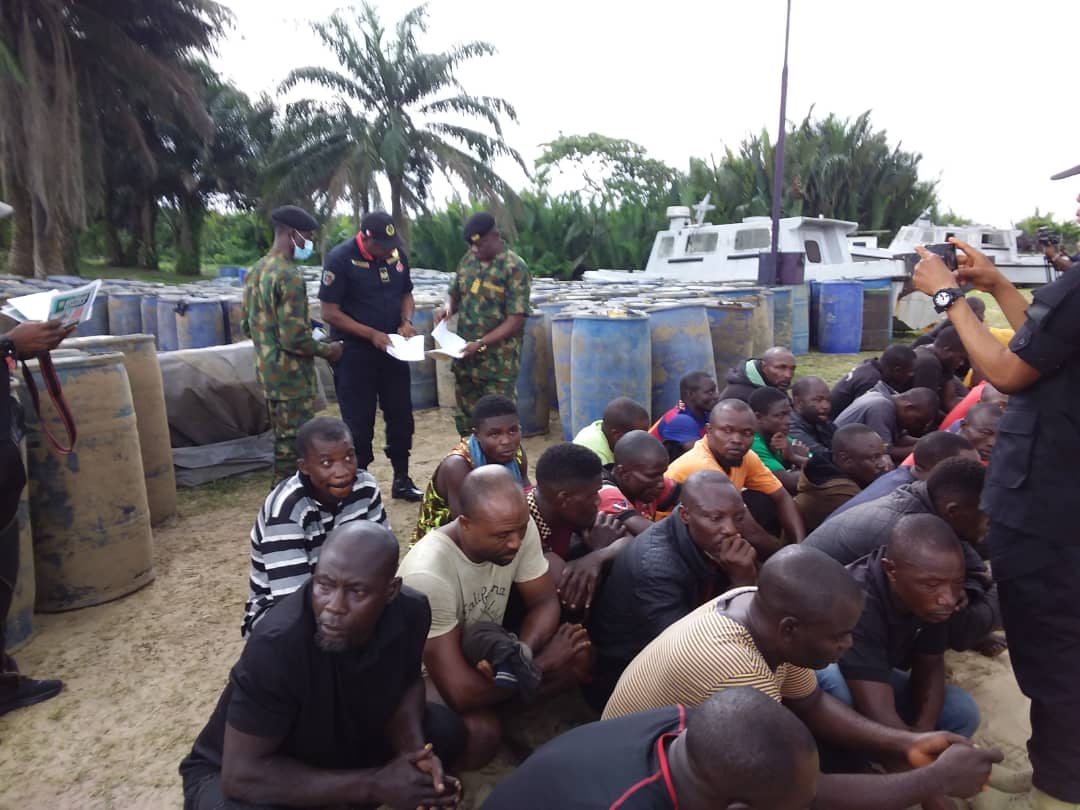 The Nigerian Navy has apprehended 35 suspected oil thieves and seized from them 408 drums of suspected illegal refined Automotive Gas Oil (AGO) in Akwa Ibom State.

The Naval Commanding Officer, Forward Operating Base (FOB), Ibaka, Mbo Local Government Area of the state, Navy Capt. Mohammed Abu who paraded the suspects to newsmen on Wednesday said they were apprehended on November 26, 2021 while on routine patrol.

The suspects he said will be handed over to operatives of Nigeria Security and Civil Defence Corps (NSCDC) in Ibaka Mbo Local Government Area after their parade.

He said, “I will be handing over the suspects and exhibits of wooden boats that were intercepted by the NNS Thunder on the Nov. 26, at high sea having infracted economic policy of the country.

“The Chief of the Naval Staff has given a clear directive to Nigerian Navy to free the waterways of illegalities and other maritime crimes.

“So, having said this, we have three wooden boats which were conveying 408 drums of AGO and 40 drums of PMS mixed with oil, 906 empty drums and 35 male suspects are here before you.

“I am handing them over to you, as the Prosecuting Agency to carry out further investigation and prosecute them accordingly and revert to the Nigerian Navy on the outcome,” Abu said.

The commanding officer said the arrest of the suspected vandals has sent messages to criminals that the Nigerian Navy would not relent in ensuring all economic sabotage in the Nigerian maritime space is punished.

“This arrest is to send a message to those vandals of our crude oil pipelines that the CNS has zero-tolerance for crude oil theft and our ships are out there looking for them and we will arrest them until they are out of our maritime domain,” he said.

He appealed to smugglers and vandals of petroleum products to stay out of the business, as the base would not relent in its continuous patrol to sustain the directive of the CNS and rid criminal elements out of Nigeria waterways.

“I deployed our boats and identified the creeks where they are operating within Mbo waterways. As I speak to you, I have three of our boats that have choked them up in creeks within the waterways at Unyenge, Okposo and Ikang.”

Meanwhile, the Head of Anti Vandals, Nigeria Security and Civil Defence Corps, Akwa Ibom Command, Assistant Commandant of Corps, Adamu Jafaaru, received the suspects and the exhibits on behalf of the NSCDC.

Jafaaru said the agency would carry out thorough investigations on the suspects and all those culpable would be arraigned in court soon.

He warned vandals to desist from sabotaging the economy of the nation, stressing that the NSCDC would not relent in their mandate of protecting government critical infrastructure.

“I want to assure you all that as the Nigerian Navy handed over the suspects and exhibits to us as the Prosecuting Agency. We will conduct a thorough investigation and ensure diligent prosecution of those involved in this economic sabotage of the nation.” He said.