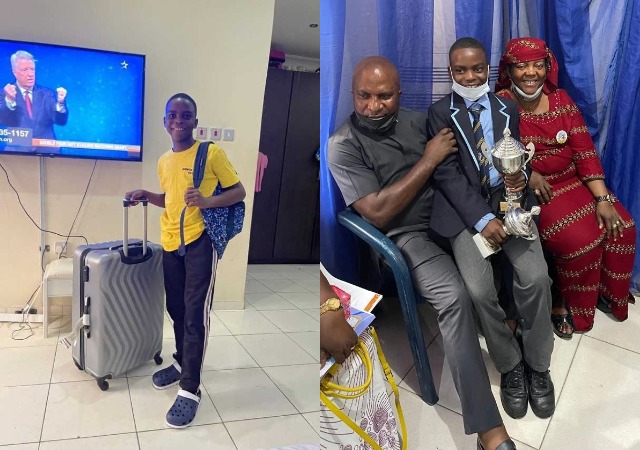 But for his untimely and gruesome death earlier in the week, the household of the Oromonis was supposed to buzz with excitement as Sylvester Oromoni (Jnr), a Junior Secondary School two pupil at Dowen College, Lekki, Lagos, would have clocked at 12 today.

His painful exit on Tuesday notwithstanding, the family would still mark his birthday posthumously.

“We will celebrate his birthday on the 4th of December (today). Please, tell Nigerians to join us,” Sylvester junior’s bereaved father, Sylvester Oromoni, told City Round on Thursday; his voice steeped in grief.

This is just as the Lagos State Government shut down the school on Friday till further notice to allow the police carry out thorough investigations on the circumstances surrounding the teenager’s demise.

The news of his death went viral on Wednesday following a social media post by his cousin, Perry Oromoni, who alleged that some senior pupils of the college beat him up for refusing to join a cult.

Speaking to one of our correspondents on Thursday, Sylvester Snr said his late son had complained of being bullied by one of the senior pupils about three months earlier.

He added that he had sent his elder son to notify the school authorities of the issue and was given the assurance that it would be resolved.

The father said, “Two Sundays ago, we got a call that the boy was hospitalised and had injuries in the legs while playing football with his mates. I sent his guardian to go and pick him up but when he got there he said my son complained of pains all over his body, including his stomach. He kept on complaining but didn’t talk when asked what happened. We saw the fear in him but he refused to talk.”

The father also said that the guardian – his eldest son – who picked up Sylvester Jnr called to inform him that his condition was critical.

He said, “Last week, I went to Lagos to bring him to Warri (Delta State). I flew from Asaba to Lagos. Since this thing happened till he died on Tuesday, he could not sleep throughout the night. He would be complaining of pains in his chest and legs. We did a test and tried to massage his legs. There was no dislocation or fracture; it was his ankle, waist, stomach and thighs that were swollen and his mouth was peeling.

“On Monday, he told us that some senior pupils entered the hostel; five of them – four in SS2 and one in SS1. He said he was on his bed and they entered the hostel and flogged him with a belt. He said he fell from the bed and they kicked him and trampled on his body. I asked why he didn’t tell us all this while but he said he was scared because the seniors had threatened to kill his roommates if any of them revealed what happened. He said the boys told him to lie that he fell while playing with other pupils.”

Sylvester added that following a scan run on the boy, a doctor said he suffered “liver enlargement and that congealed blood had gathered by the side of the liver.”

Some video clips obtained by City Round showed Sylvester Jnr writhing in pain, moaning to every move and touch to his legs and back.

His ankles were swollen while his dried lips were caked with blood. He could barely walk as he was helped to the laboratory and the convenience.

But while commiserating with the deceased’s family, the school in a statement signed by the principal on Wednesday denied that Sylvester Jnr was tortured.

It claimed that on November 21, one of the hostel parents reported to the management that the boy was injured while playing football and a resident nurse immediately administered first aid on him after which he returned to his hostel room.

The statement read in part, “He was in class on Monday, 22nd day of November 2021, but during (the) school hours, one of his friends accompanied him to the sickbay where he complained of some pain in his hip. The doctor examined him and prescribed ibuprofen for the pain, while the nurse massaged his leg, after which he felt a bit better.

The statement further said that the doctor called Sylvester’s mother again the next day when the guardian failed to show up, adding that the guardian eventually showed up and took him for X-ray, which revealed that no part of his body was broken or injured.

“As a result, it came as no small shock to us to read social media tales that he was beaten by some students and that he specifically mentioned some names. We immediately commenced investigations and invited the students allegedly mentioned for an interview. His guardian was also present during the interviews, which revealed that nothing of such happened.

Meanwhile, the Lagos State Ministry of Education on Friday closed the school pending when the police would conclude investigation into the incident.

A statement by the Assistant Director, Public Affairs, Lagos State Ministry of Education, Mr Ganiu Lawal, said the Commissioner of Education, Mrs Folasade Adefisayo, announced the closure after a meeting with the management of the school.

“The Lagos State Government has ordered the indefinite closure of Dowen College, Lekki, pending the outcome of an investigation into the death of Sylvester Oromoni Jnr, a student of the school,” the statement read in part.

Adefisayo also called for calm, saying effort would be made to get to the root of the incident.

He wrote, “We shall be failing in our duties as parents/guardians, administrators, security agencies and government if we do not get to the bottom of the case of the late Sylvester Oromoni. It is beholden to us to enthrone a safe environment in our schools. #Justiceforsylvester.”