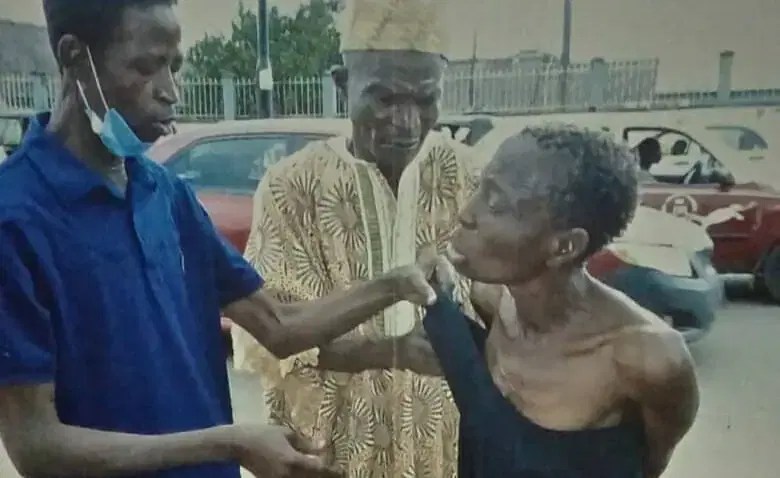 The government of Oyo state has rescued a homeless old woman identified as Madam Silifatu Olawale who was found to be mentally challenged and accused of possession of witch-craft in the city of Ibadan.

The commissioner for women affairs and social inclusion, Alhaja Kafilat Olayiwola while handling her over to her relatives condemned in its totality the act of jungle justice and unjust treatment of suspected mentally ill persons in the society by members of the public.

Describing the act as barbaric and traumatizing, Olayiwole advised members of the public to always hand over such cases to the appropriate authorities for further investigation, as wrongful acts are not reversible.

Alhaja Olayiwola who spoke through the Director of Administrative and Supplies, Barrister Olumuyiwa Olagoke said, “our people should be cautious and avoid unlawful deeds that can truncate the peaceful atmosphere in the state”.

Speaking on Madam 74-year old Madam Silifatu Olawale’s case, the Commissioner said, “about two weeks ago, we received an urgent call about an unclad woman in front of the state secretariat main entrance gate who was wrongfully accused of being a witch craft thereby leading to serious beating, we swung into action immediately and rescue her from being lynched by the angry mob”. “We took her to one of our centers for adequate care and protection and thank God that today, the State government has rehabilitated her and she now in her stable mind to return to her family hale and hearty, she said”.

Narrating her ordeal, the septuagenarian, who spoke with heart of gratitude to God for sparing her life and to Oyo state government for said she was once a petty trader at Agbeni market Ibadan and later moved to Bodija market doing menial jobs for survival before the incident occurred.

“I gave birth to seven children, I lost four to untimely death and the most painful one was when I lost my twins to the cold hands of death and later my husband died too. I was distressed and some people wanted to collect the only property my husband left for me, which is an uncompleted building that I used as a shelter.

Fighting back tears while narrating her ordeal, she said, “On the day that the state government rescued my soul, I went to Bodija market for my usual menial job, I usually carry loads for people, they accused me that am a witch, tore all my clothes and wished me death, but God in His infinite mercy rescued my soul, am grateful to Governor Seyi Makinde for show of love”.

Receiving her Mother, Mr Taiwo Olawale who was accompanied by her aunty, Mrs Nosiratu Buhari appreciated the efforts of the State government for the adequate care and protection given to her mother in due course.

He explained further that her mother has been battling with an unstable state of mind since the year 1999 and the family has been getting medical attention not until recently the situation intensified to an unpleasant state.”

Speaking on the state of health of the survivor, the Medical Personnel of the partnering Non-Governmental Organization, Emmanuel Rehabilitation center for the Mentally ill, Oja’gbo, Ibadan, Dr Adeniyi Lawal identified Madam Olawale’s illness as ‘Senile Dementia’.

In another development, the Commissioner for Trade, Industry Investment and Cooperatives, Barr. Olasunkanmi Olaleye has stressed the State Government’s interest in the activities of the organized private sector.

He said the Governor Seyi Makinde led administration has awarded infrastructural, road contracts and propositions of Industrial Estate in order to ease problems of entrepreneurs and expand the economy of the state.

He disclosed this while speaking at the quarterly meeting of the Oyo Council of Chamber of Commerce, Industry, Mines and Agriculture & Other Organised Private Sectors, held at Western Hall, Secretariat, Ibadan, on Wednesday, 1st December, 2021.