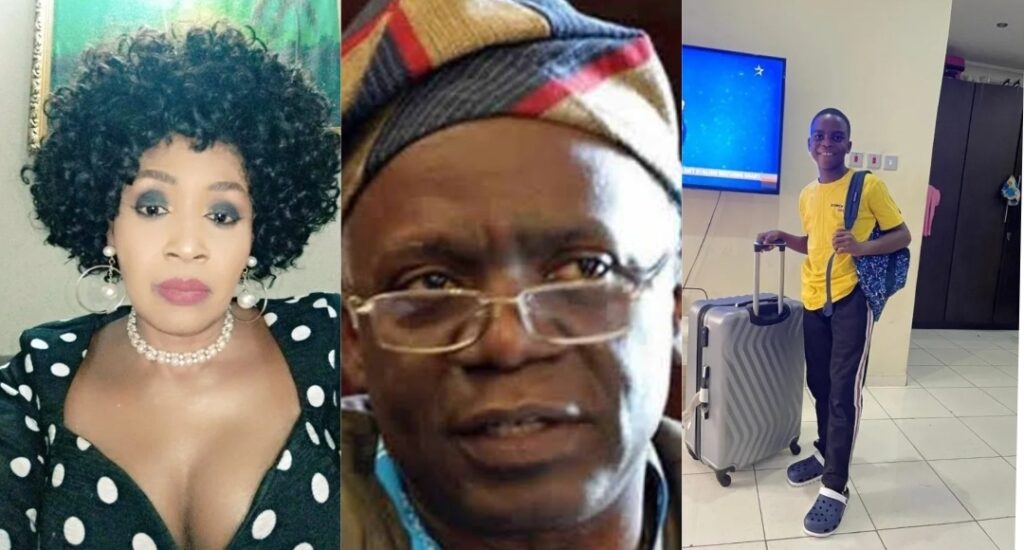 It could be recalled that Falana recently filed a petition against Ms Olunloyo over the statements she made concerning the death of Sylvester Oromoni, a 12-year-old boy who was reportedly beaten to death by some students at Dowen College, Lekki, Lagos.

Sylvester was alleged to have been bullied, beaten, and fed with a chemical by five students over his refusal to join their cult group, which resulted in his death.

The deceased’s father had also narrated how his son was bullied by the suspected cultists and asked to describe his sister’s private part, adding that the boy suffered liver enlargement due to congealed blood before his death.

Taking to Twitter, Kemi Olunloyo claimed that Sylvester was willing to join the cult group in his school Dowen college.

Olunloyo also claimed that the boy willingly told the guys initiating him that he has seen his sister’s privates, adding that he consented to be beaten and he agreed to drink engine oil which eventually resulted in his death.

Falana, who is representing the Oromoni family sent a petition to the Nigerian police and other security agencies, calling for an investigation to be conducted regarding Olunloyo’s claim that Sylvester was a cult member among others.

Reacting in a statement personally issued by Olunloyo, the journalist said she will be suing Falana and the Oromoni family for dragging her professional reputation by asking police to invite her over the “reckless statement” she made concerning Sylvester.

Olunloyo, who also accused Falana of trying to use ‘scare tactics’ on her, advised the Oromoni family to fire him, stressing that the human rights lawyer was simply a distraction.

Femi Falana is an overrated SAN who feels he’s above the law. He carries a dangerous ego which he feels he can use to intimidate the government and protect the people.

I’m planning to sue him for dragging my professional reputation asking police to invite me for specifically my “reckless statement” concerning Sylvester Oromoni a fake petition we are yet to see. Reckless what? He wants to use scare tactics he uses with successive governments. If in fact he’s filing on behalf of the Oromoni family I will be suing them too for damages.

The Oromoni family should fire him and use their senses. Falana is a distraction and one who loves media trials. He is not focused and doesn’t care about civil, legal and human rights of anyone just acts like he does. No family of a dead schoolboy should drag an investigative journalist. The era of those who spoil my name in this country Nigeria will end soon. I know my legal rights. I have information that could make or break this case designed to ruin the reputation of so many others. Nigerians have their mob mentality. Falana investigate the children police have in custody. One of them is holding a document that Sylvester consented to and his family are well aware.

The Oromoni family should undergo a LIE DETECTOR TEST as well as the staff in custody. They have a lot of info the dying child shared with them they did not post on social media. I’m an award winning investigative journalist of 27 years not an Internet blogger and social media personality in this capacity. Any journalist can open any case at anytime. We are journalists, we know our mission. We will NOT be intimidated and that applies to you Mr Falana, all the nonentity celebrities and their fans sending me violent threats.

The lies in Nigeria is way too much. Nobody can suppress the truth and the truth is Kemi Olunloyo. Merry Christmas to all.