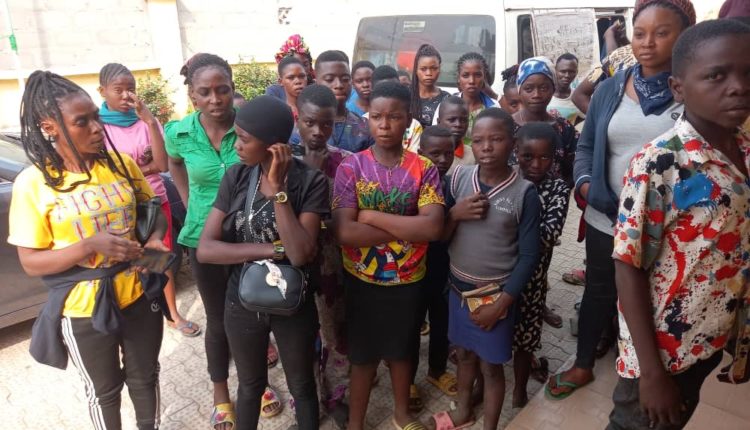 No fewer than 38 people mostly young boys and girls were intercepted in separate places in Benue State on Friday and Saturday when they were to be trafficked outside the state.

The first incident involved six victims and a suspect who were picked up on Friday at a motor park in Makurdi, the Benue State capital.

According to Benue Zonal Commander of the National Agency for the Prohibition of Trafficking in Persons (NAPTIP), Iveren Bai in a statement on Saturday, January 8, 2022, the suspects were rounded up following the receipt of a call from a concerned citizen.

According to her, “During the early hours of this morning Friday 7th January 2022, the Makurdi Zonal Command received a call from a concerned citizen from Duku Motor Part at Wurukum Makurdi, who alerted the command of a suspected case of Human Trafficking involving seven ladies of which one is the suspected trafficker.

“Officers of the command arrived Duku Motor Park some few minutes after receiving the call and met the six ladies and the suspect who said they were all traveling to Lagos.

“The victims were between the ages 16 and 24 years by facial analysis. At the time of the arrival, the Nigerian police were also on ground because they were also called on the matter.

She further said that about N500,000 was found on the suspect alongside some foreign currencies which raised the suspicion that the victims were to be moved to a destination outside the country yet to be determined.

Bai added, “The ladies were all moved to the office of the Nigerian Police in company of the officers of NAPTIP and the police are carrying out preliminary investigation for onward transfer to NAPTIP for further investigation and possible prosecution.

“We would like to thank the management of Duku Motor Park and the Concerned Citizens who alerted the authorities. I want to use this opportunity to also call on everyone to be on the lookout for such indicators especially on promises of lucrative jobs outside the state and abroad.

The NAPTIP boss also warned criminally-minded members of the public to desist from such evil acts or be prepared to face the wrath of the law.

It was gathered that the buses were purportedly heading to Ede in Osun State when they were intercepted by Men of Operation Zenda.

The young people were made up of 13 boys and 19 girls with the oldest being about 25 years.

It was gathered that a young woman identified as Linda Angbandoo Akaasema who was in charge of the young girls and boys claimed that they were returning to Osun State where they were schooling after visiting Benue for the festive period.

She claimed to be running an orphanage home with the name Akaasema Child care foundation and that it was registered in Benue but operational in Osun State.

The suspect disclosed further that the children are from Zaki-Biam, Jootar and other towns in Ukum Local Government area of Benue State sharing boundaries with Taraba State.

But the woman could not provide evidence to prove that the children were already in school and only visited home.

“The suspect could not provide any proof and unable to provide any document to identify herself, what she said was that she forgot all while leaving Osun State,” one of the sources said.