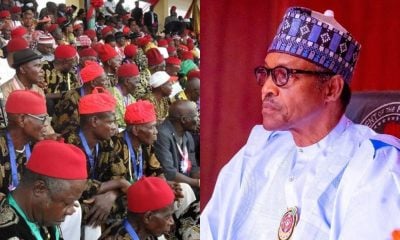 The youth wing of the apex Igbo socio-cultural organization, Ohanaeze Ndigbo has urged President Muhammadu Buhari to order the release of Mazi Nnamdi Kanu as a new year gift to Ndigbo.

Ohanaeze Youth Council Worldwide made the appeal in a statement by its President-General, Mazi Okwu Nnabuike.

Buhari had last week ruled out the possibility of a political solution to Kanu’s freedom. This was after he had earlier told a delegation of Igbo leaders that he would look into Kanu’s case.

Kanu, the leader of the Indigenous People of Biafra, IPOB, has been in detention weeks after his re-arrest in Kenya, a situation that has continued to create tension in the South-East.

He is expected to appear in court tomorrow, Tuesday, where his lawyers would make further arguments for his bail.

In a statement made available on Monday, Okwu urged President Buhari to reconsider his hard stance on the IPOB leader’s incarceration.

The Ohanaeze chieftain noted that “as a father, the President should not be pandering to the advice of a few people which is not in the best interest of the country.

“We are all witnesses to the unrest that has been ravaging the South-East zone since Nnamdi Kanu’s re-arrest and detention. The detention has only worsened matters and this is why we are making a passionate appeal to Mr. President to release him unconditionally.

“Recall that the use of force never worked in the Niger-Delta region until the late President Yar’adua brought in amnesty and peace was restored. Mr. President must take a cue from that and discountenance those urging him not to free Kanu.

“The highest new year gift he should give to Ndigbo is to accept the political solution to Kanu’s case,” Okwu stated.

He, however, advised the leadership of the IPOB to equally toe the line of peace and avoid making further inflammatory statements.

“They should cease from making further statements that are worsening the situation, they should give peace a chance and allow the ongoing negotiation efforts not to be in vain. This is why all forms of sit-at-home have to end,” he advised.

He appealed to the National Assembly caucus from the South-East and other Igbo leaders to continue their efforts towards securing Kanu’s freedom.