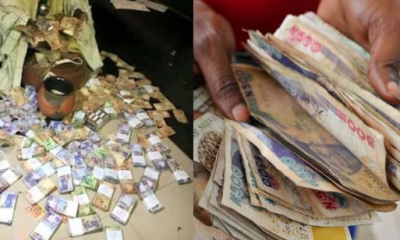 Nigerian clergyman identified as Pastor Moses Olugbenga has lamented the incidence of money ritual-killings in the country.

He advised youths to dump the dubious idea and in lieu embrace hard work in their quest for survival.

This was made known by the clergyman in an interview with the News Agency of Nigeria in Ilorin on Wednesday.

The cleric noted that the youths were not ready to work hard and wait patiently for their time; rather they always considered money rituals as the best option to get rich.

The cleric further emphasised the sanctity of hard work, which though might not yield sudden wealth, but unlike fetish course, would at least guarantee peace of mind and forestall sudden untimely deaths.

“Money ritual is ungodly and evil; stop being desperate to get rich through money rituals.

“Wait patiently for God’s time, as God’s time is the best. God’s money will not take anything away from you, but will rather give you the rest of mind.

“Stop being desperate for blood money; remain focused and stop competing with friends or family members,” he admonished.

Olugbenga explained that some parents, knowingly or unknowingly, often lured their children and wards into the precarious venture of money rituals, especially when they fondly compared them to well-to-do friends, colleagues and neighbours around.

While discountenancing as “fake” and mischievous, most social media posts canvassing patronage for money rituals, the cleric also adjured parents to eschew such insensitive comparisons, but rather should goad their wards into working hard and being prayerful.

“Stop taking them seriously. They will push you beyond your limit if you continue to give them attention,” he charged.

The spate of ritual killings across the country has received a wide condemnation in recent times, following a series of mind-blowing incidents recorded, according to security agencies.

Earlier this year, three teenagers were arrested in the Oke-Aregba area of Abeokuta, Ogun state capital, after killing and burning their girlfriend’s skull in the consummation of a money ritual.

The trio, upon arrest, had claimed they took the grievous risk, after stumbling on a Facebook post detailing the rites for the money ritual.