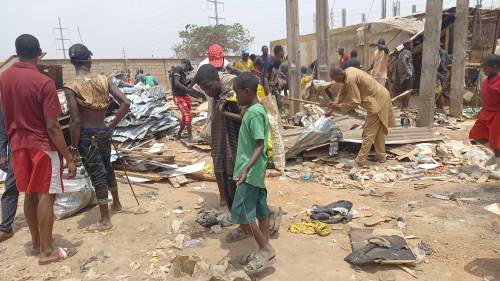 Two person have lost their lives and many others injured in Kuchigoro area during a demolition exercise by the Federal Capital Territory Ministerial Task Force on City Sanitation.

According to SaharaReporters, the task force stormed the community on Wednesday at about 10am with bulldozers and pulled down some “illegal structures” in the area.

Some of the shops owners were said to have pleaded with the team to allow them evacuate their goods and belongings which fell into the deaf ears of the stern looking policemen.

Following the protest by the residents that there was no notice for the demolition, the police in the process opened fire and killed two people on the spot.

The situation that led to pandemonium in the area as residents scampered for safety.

One of the victims was said to be a resident of Lugbe a nearby community who was on a visit to his brother in the community.

Three other people were said to have sustained gunshot injuries, one of them was rushed to the Wuse General hospital where doctors are still battling to save his life.

The remaining two victims, Abba Lawal and Agai Yakubu were rushed to Bio Cycle Clinic in the community for treatments.

Some of the residents who spoke to SaharaReporters condemned the action of the police for using live bullets on harmless citizens.

One of the eyewitnesses, Omang Patrick, said, “The task force arrived Kuchigoro with armed policemen and started pulling down houses and shops with bulldozers. People were pleading that they should allow them to remove their properties but they did not listen.

“The next thing was that they started shooting live bullets and they shot five persons in the process. Two people died on the spot and they took their dead bodies away. We had to rush the other victims to the hospital for treatment.”