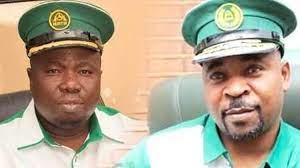 Gunshots were heard Friday morning at Meiran – Ijaiye axis and Ekoro road in the Abule-Egba area.

The battle involves the National Union of Road Transport Workers (NURTW) and the Tricycle Owners and Operators Association of Nigeria (TOOAN).

The rivals are loyalists of suspended Lagos NURTW Chairman, Musiliu Akinsanya a.k.a. MC Oluomo, and Istijaba.

The leaders have been at loggerheads in recent years over personal and union issues.

The matter has now degenerated with the open use of charms, guns, machetes and other weapons.

The Lagos State Police Command has deployed operatives to the scene and assured residents of safety.

”Men of nearby divisions and the RRS are fully on ground, and the areas are absolutely calm”, the spokesman tweeted.