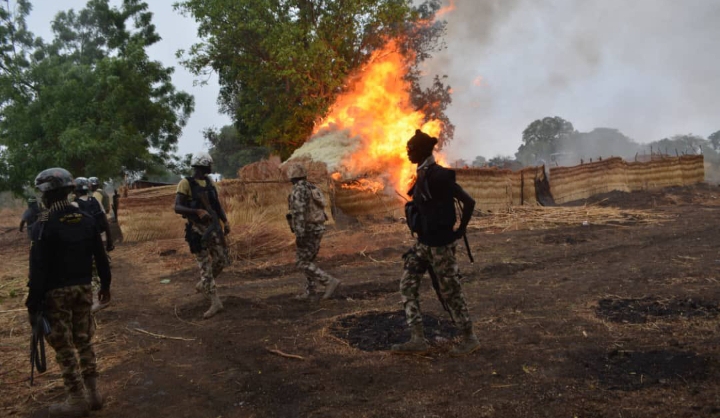 Men of the Nigerian army neutralized several ISWAP/BokoHaram terrorists including the Amir & spiritual head of Galta.

It was gathered that troops of Operation Desert Sanity inflicted heavy casualties on the terrorists during an aggressive clearance operation around Manjo Ali Qere in Borno State on Thur 28 April 2022.

A military source stated that troops also recovered Arms and Ammunition from the terrorists.

It was also learnt that Nigerian Army Special Forces troops of Operation Hadin Kai have raided 13 camps of the terrorists in the fringes of Sambisa Forest in the North East of Borno state.

It was gathered that the terrorists were eliminated after a crushing intrusion into their enclaves in the long week Operations by the Nigerian Army 402 Special Forces Brigade under the second phase of Operation Desert Sanity.

During the fighting patrol to clear the general areas the troops encountered resistance from the terrorists but overpowered and neutralised scores of them forcing many of them to surrender while the surviving terrorists retreated and fled the scene with bullets wounds.

The terrorists also left behind over 500 women and children including their families and those that they forcefully abducted.

The sources said that one of the the rescued victims included, Hajja Fusambe, a mother of popular dreaded Boko Haram Commander known as Alhaji Ari Hajja Fusambe, who was taken to Sambisa forest by her son since 2014.

The Sources added that 50 more trapped women and children surrender in the early hours of Wednesday to troops of 21 Special Forces Brigade Bama, where they will be profiled and undergo rehabilitation.