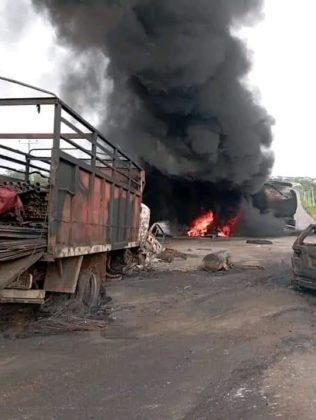 Some gunmen suspected to be enforcers of IPOB’s sit at home order have burnt some vehicles in Delta state.

It was gathered that the incident happened along Anwai-Illah road in ogbolu, Oshimili North Local government area of the State.

The development took place this morning, May 18 as police have cordoned off the area and raised alertness level.

The incident is the confirmed in a statement released by police command public relations officer, Edafe Bright.

Although the spokesperson was unable to say who was responsible for the attack.

No life was lost but four vehicles were burnt including three articulated vehicles conveying Cement.

Businesses around the area where the incident occurred are shut but in Asaba the capital, normal commercial and other activities are going on.