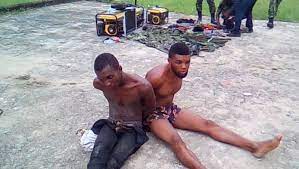 A notorious kidnapper and gang leader in Akwa Ibom state, Otobong Moses popularly known as Oto Abasi has been killed by security operatives.

It was gathered that the notorious criminal was killed in a raid carried out by troops of 2 Brigade, Nigerian Army in conjunction with the Nigerian Police, Nigerian Security and Civil Defence Corps as well as other security agencies.

Disclosing this in a statement, the army spokesperson said two kidnap victims were rescued while two members of the deadly gang were arrested, adding that items recovered from the raid included one Sub Machine Gun and magazine, 67 rounds of 9MM ammunition, two motorcycles, 16 mobile phones, one AK 47 rifle magazine with 30 rounds of 7.62MM Special ammunition and nine machetes.

“The raid operation was as a result of a sustained surveillance on the activities of the notorious kingpin and his syndicate.

“Further investigation revealed that the criminal gang is known for terrorising the locals, kidnapping, killing and burying their victims who do not do their biddings in shallow graves in the general area.

“The good people of Etim Ekpo, Ukanafun LGAs and indeed the entire Akwa Ibom State are enjoined to go about their lawful business. However, those who are bent on disturbing the peace enjoyed in the state are advised to desist or prepare to face the wrath of the law.”