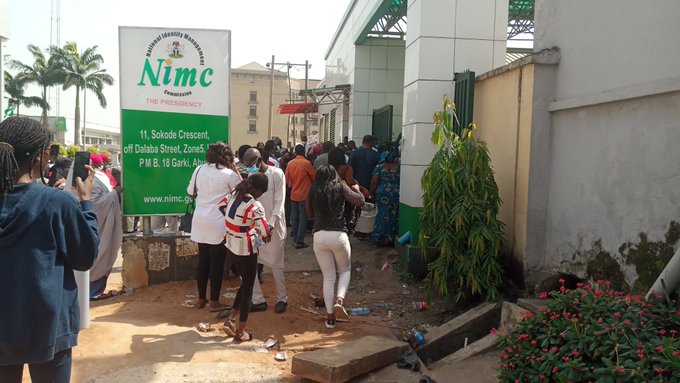 In a document, titled, ‘Deployment of a Device Management System: Project Information Memorandum,’ NCC said Nigeria had about 132 million unique devices connected to telecommunication networks in 2020.

The document reads, “With more than 200 million active lines on the Nigerian telecommunication network (as of December 2021), there is great potential for the development of a DMS in the Nigerian market.

“It is estimated that there were approximately 132 million unique devices on the telecommunication network in 2020.”

As at April 2022, 80.7 million Nigerians had NINs leaving 51.3 million device owners without NINs.

NCC and NIMC stated that a NIN could be linked to an average of three to four SIMs, describing Nigeria as a multi-SIM nation.

The global organisation representing telecom operators, GSMA, revealed that there are at least 97.5 million unique mobile subscribers in Nigeria as of September 2018.

The NIN-Subscriber Identity Module policy states that all telecom subscribers must link their SIMs to their NINs.

The Minister of Communications and Digital Economy, Isa Pantami in the ‘Revised National Identity Policy for Sim Card Registration said, “Mandating the use of NIN for SIM card registration will accelerate the growth of the national identity database as the SIM card registration database is one of the largest databases holding the digital identity of Nigerians, including biometrics and other essential information on citizens.

“This will enable Nigeria to take giant strides towards improving national planning, overcoming security challenges and boosting our GDP.”

The Founder, e86 Limited, Olugbenga Odeyemi while speaking on NIN linkage said it is unbelievable that a policy as simple as the SIM-NIN has not been effectively implemented until now.

He added that NIN was designed to be linked to everything as it relates to every Nigerian.

Odeyemi said, “It is embarrassing to look back over the years, seeing how badly this has been implemented. The current director of NITDA has done well to fast forward the adoption of the NIN, I know there are a number of issues along the way but it’s important to focus on the results.

“Within the last one year, we have seen a lot of results, the implementation has not been perfect, but it’s been a lot better than what we saw in the previous years.”

According to Odeyemi, there may be a need to add more time to enable more people to get captured by NIMC because of bottlenecks in the registration process.

“This ultimately means that government registration centres where payment isn’t required are constantly jammed daily. Also, there is a need for more education. Most people still do not understand the essence of this policy. If possible, the government may also have to introduce incentives for those who successfully complete their registration.

“There are so many ways we can make improvements and I hope that we’ll continue to make things better.”

The President, of the National Association of Telecoms Subscribers, Adeolu Ogunbanjo, added, “If this amounts to about 51 million that cannot do business with their phones, and are being impoverished, the government should please not send people to poverty by this policy implementation.

“This is an appeal now to the president to reconsider this policy. On behalf of 51 million, I want to appeal for an extension. They should please extend it for the sake of doing good business in Nigeria. They should at least have a human face.”