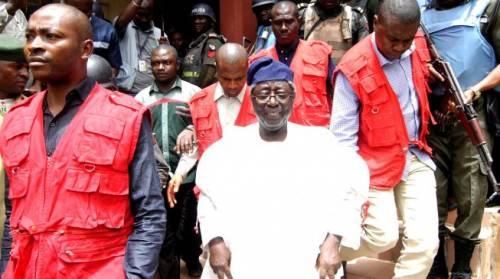 The Economic and Financial Crimes Commission (EFCC) has closed its case against a former Plateau State Governor, Jonah Jang.

Also facing trial is a former cashier in the Office of the Secretary to the State Government (SSG), Yusuf Pam.

Justice C. L. Dabup of Plateau State High Court in Jos is presiding over the case.

Jang and Pam are being prosecuted for alleged criminal breach of trust and misappropriation of state funds to the tune of N6.3billion.

At the last sitting, the EFCC had presented its fourteenth witness (PW14), Taiwo Oloronyomi.

Oloronyomi is a Chief Superintendent of the Independent Corrupt Practices and Other Related Offence Commission (ICPC).

While presenting his evidence, Pam’s counsel, S. Olawale raised an objection, arguing that the statement of his client to the ICPC was not voluntary.

Olawale told the court that his client was subjected to physical and psychological torture by one Hajiya Fatima Mohammed of the commission.

But Justice Dabup admitted the statement Pam made on November 17, 2016 to the ICPC.

It contained details of the withdrawal of monies taken to Jang through cheques approved by the Permanent Secretary in the SSG’s office.

The judge however rejected the statement Pam made on November 23, 2016, on grounds that the mandatory cautionary word was not taken before Pam wrote it.

The defendants were expected to open their defence today but Jang’s counsel, Mike Ozekhome (SAN) and Olawale informed the court of their decision not to do so.

Justice Dabup adjourned the matter to July 1, 2022 for adoption of final written addresses.