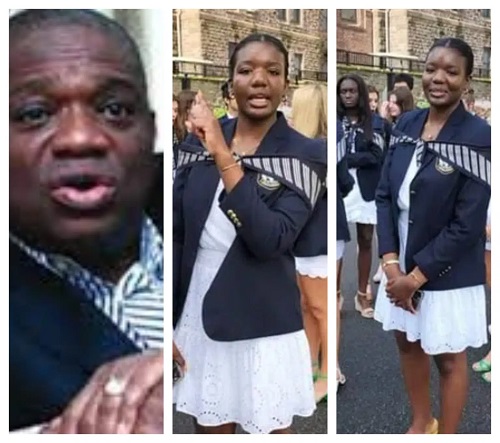 Orji Kalu has slammed those criticizing him for sending his children to school abroad.

The Chief Whip of the Senate, Orji Uzor Kalu has replied those criticizing him for enrolling all his five children in schools abroad, while Nigerian students are at home because of strike action by the Academic Staff Union of Universities (ASUU).

It recalls that ASUU had embarked on a warning strike since February 14, over the failure of the federal government to meet its demands.

Amid the strike, the government and the union have held a series of meetings, but no agreement has been reached by both sides on ending the strike.

Senator Kalu recently took to his Facebook page and shared photos of his daughter’s graduation ceremony after completing her program in a school abroad.

The photos angered many Nigerians who lashed out at him for sending his daughter abroad to school while students in the country are currently at home due to the ASUU strike.

Reacting to the backlash, the senator said that all his children were already in the US before he got into public office, adding that there wasn’t a correlation between his child’s education and comment about ASUU.

“My five children were born in the US and are all citizens of the US. My first child , Neya was born in 1991 and I do not see any correlation with my children’s education and the comments about ASUU.

“My children were already schooling in the US even before I became Governor in 1999. It is just fair I clarify this with reference to some unkind comments I have read,” Kalu wrote.