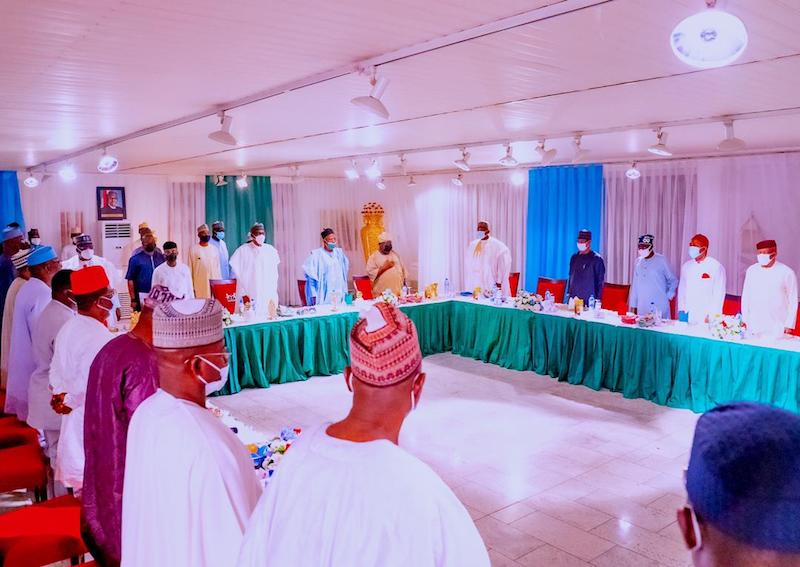 Southern Governors Forum has said it received with utmost joy the resolution of the Northern All Progressives Congress, APC governors that a Southerner should succeed President Muhammadu Buhari come 2023.

APC Northern Governors and party leaders from the region on Saturday tasked President Muhammadu Buhari to ensure he is succeeded by one of the aspirants from the South.

The ruling party sold about 28 presidential forms to 28 different aspirants most of whom are from the South.

Having reached this decision, the Northern leaders went further to ask that their kinsmen from the region, who are warming up for the primaries, withdraw.

They appealed to the northern aspirants to allow only their Southern counterparts to contest the primary election slated for the 6th and 8th of June, 2022.

And in a statement signed by the Chairman of the Southern Governors Forum, Rotimi Akeredolu, the Governor hailed his northern counterparts as great patriots and reliable partners.

“We acknowledge this courageous stance for equity and moral rectitude. We applaud the zeal and determination of our brothers to engage realistically and honestly. We salute this uncommon resolve to confront issues militating against the march towards nationhood and ultimate greatness,” the statement said.

The statement said by this singular act, the Northern APC governors have clearly shown that they were in support of a stable, progressive and prosperous Nigeria, while congratulating the Chairman of the Northern APC Governors’ Forum, Abubakar Badaru, for his exemplary conduct.

“Posterity will remember him for good. We thank the leadership of the Northern Governors’ Forum for the patriotic zest displayed at this crucial moment,” it added.