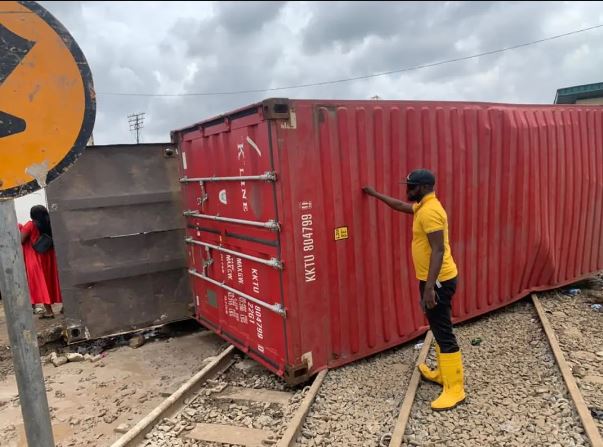 A male passerby was injured after a truck laden with a 20ft container overturned on Saturday at the Oyingbo Rail Crossing, Yaba, Lagos.

The Permanent Secretary, Lagos State Emergency Management Agency, Dr Olufemi Oke-Osanyintolu, who confirmed the incident in a statement said the truck driver drove on the bad sections of the road, and overturned into the rail tracks.

“Upon arrival at the incident scene, an articulated truck laden with a 20ft container was found at the railway crossing at the aforementioned location.

“Further investigation revealed that the truck driver poorly navigated the bad sections of the road and as a result, the truck overturned onto the rail tracks. No life was lost but an adult male passerby was injured as a result of the incident.

“The agency’s heavy-duty forklift has been dispatched to evacuate the truck off the rail track to eliminate a secondary train accident. Unfortunately, the operation is being hampered by miscreants at the scene. Request for armed intervention by Nigeria Police has been made,” the statement read.

According to PUNCH, in a follow-up response to inquiries, Oke-Osanyintolu noted that the truck and container had both been recovered from the rail track onto a nearby lay-by.

He stated, “The axis is now safe for both rail and road traffic. Recovery operations have also been concluded.”