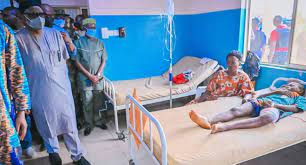 It was gathered that the injured victims, who were rushed to the emergency unit of the hospital, are in need of blood.

Blood donors are urgently needed at the Federal Medical Centre, FMC, where most of the wounded victims of the attack at St.Francis Catholic Church, Owaluwa Owo, Ondo State, on Sunday are hospitalized.

Scores of worshippers were killed while service was ongoing in the church, which is located in the heart of the town.

TORI reported that the worshippers, mostly children and women, were killed in the attack by gunmen, who also made use of dynamite.

It was gathered that the injured victims, who were rushed to the emergency unit of the hospital, are in need of blood.

A total of 35 persons were brought in dead, according to workers at the Federal Medical Centre and Saint Louis Hospital, both in Owo, where the dead and the injured were taken to.

The number of those killed was yet to be specified by the church or the State authorities.

More deaths were said to have been recorded as some of those injured died hours after the incident.

A woman, who was shot in the leg during the attack, was said to have given up the ghost on Sunday evening.