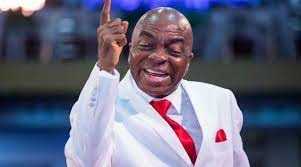 He said it was now clear that when the wicked rule, the people mourn, saying that he shouted this in 2015.

According to PM News, the man of God made the proclamation on Wednesday.

He also described Buhari’s government as evil from head to toe.

He said it was now clear that when the wicked rule, the people mourn, saying that he shouted this in 2015.

“I am not a propagandist, I am not a public speaker, I am not an activist, I am a prophet. You blindly went and brought in this wicked government.

“Nigeria has never suffered evil like this in our history and they still want to rule? Never! After over 50 people were slaughtered, there has been no response till now. They are evil from head to toe,” he said.

Oyedepo, in a video posted by Church Gist, added that “I know the God I serve, and I know that the church is His beloved, and you touch the church, you touch the apple of His eyes. Whatever you now see is what you have chosen. But I know this God, let God arise and let his enemies be scattered.

“Anyone that dared the gathering of the saints from now is finished, finished from their roots. He said every tongue that shall rise against you in judgement, you shall condemn. You mean you can’t find where they are or you put them there?

“My God, show yourself within days, let the next seven days be days of horror, let it be days of horrors in their camp, days of irrecoverable devastation. As for you (Church members), your life is safe, anyone called by the name of the Lord is secured in this nation.

“I am not an ordained prophet, I am a God-sent prophet and you should know by now when prophets speak, people should listen. See where you brought yourself into, I knew they were evil people, I knew them.”