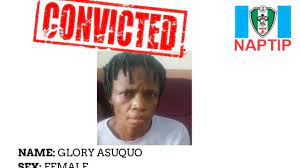 Asuquo was sentenced to six months imprisonment for contravening the human trafficking laws as contained in TIPPEA, 2015.

A 35-year-old woman identified as Glory Asuquo has been handed a jail sentence by the Federal High Court sitting in Calabar, Cross River State for trafficking and using children for alms begging.

Asuquo, who hails from Akwa Ibom State, was sentenced to six months imprisonment on Tuesday, June 6 for contravening the human trafficking laws as contained in TIPPEA, 2015.

The National Agency for the Prohibition of Trafficking in Persons (NAPTIP) in a statement on Wednesday, June 8, said Asuquo was arrested for using children to beg for alms on the streets of Calabar, the Cross River state capital.